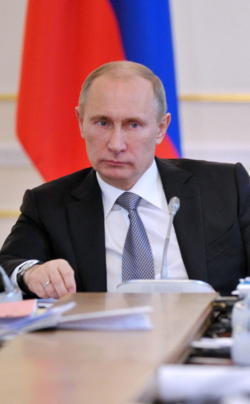 MOSCOW -- Russian President Vladimir Putin sent a congratulatory telegram to President Obama on what he termed “an ever so weighty victory gained with such a wide margin.”

“I know not from hearsay how exhaustive and intense the election campaign may be,” the Russian leader said in the telegram published on the Kremlin website Wednesday.

Putin stressed the results achieved in Russian-U.S. relations in recent years and expressed his hopes for continued joint constructive work. Cooperation is crucial for “stable and safe development in the world,” he wrote. Putin wished Obama further success and extended an invitation to visit Russia next year.

Earlier in the day Medvedev, on a visit to Vietnam, hailed the results of the U.S. presidential poll, saying that he is “glad that the president of a very big and very influential country won’t be the man who considers Russia enemy No. 1,” the Interfax news agency reported. Medvedev was alluding to remarks by GOP candidate Mitt Romney, who called Russia the “No. 1 geopolitical foe” of the U.S.

“Obama is easy to understand and a predictable partner,” Medvedev said at his news conference in Hanoi. “Whether we like America or not, every Russian family depends on how the [U.S.] dollar is doing.”

Vyacheslav Nikonov, the first deputy head of the foreign relations committee in the lower house of Russia's parliament, praised Obama’s victory but was cautious about the prospects for relations.

“Romney’s foreign policy team consisted of people who subconsciously hate Russia,” Nikonov wrote Wednesday on his Facebook account. “Romney more than once during the campaign declared Russia a geopolitical adversary No. 1. That is why the fact that Obama has won is already a good thing.”

He recalled that Obama had told Russian leaders the U.S. would be better able to negotiate issues such as the missile defense system after the elections, and Nikonov warned the relationship between the countries will largely depend on whether that dispute could be resolved.

The Kremlin is sincere in expressing satisfaction with Obama’s victory despite a theory promoted by some analysts that Romney, as a harsh opponent, would have suited Putin better, said Dmitry Oreshkin, a senior political analyst with the Institute of Geography.

“Even with Obama carrying on in the White House, the Kremlin still may continue to build up the image of a besieged fortress to deal with dissent at home,” Oreshkin said in an interview. “People in the Kremlin are realists too, and they know that on some issues they still have to sit down and talk with Washington, and in this sense as a negotiator Obama would suit much better than Romney.”

More takes from foreign media on the U.S. election

Meat cutters of Kabul hack at carcasses and praise Obama