These were among the hard journalistic lessons learned on a weekend bus tour arranged by the media center of China’s 18th Communist Party Congress.

China’s once-in-a-decade senior leadership transition doesn’t kick off until Thursday, but this is a highly scripted event, with no last-minute campaign rallies or get-out-the-vote events to cover. Lest the 1,000-plus reporters expected in Beijing start looking around for juicy stories on their own (and there are many, from government corruption to self-immolations in Tibet), the official media center has arranged some bus tours to keep journalists busy.

Forget Tiananmen Square, the Forbidden City or Mao’s mausoleum –- the idea is to showcase China’s cultural and economic achievements over the last 10 years, and how it’s progressing in accordance with, among other things, outgoing leader Hu Jintao’s principle of “scientific development.” The stops on the weekend itinerary included an abandoned steel plant that’s under redevelopment, a calligraphy clubhouse, a bicycle museum and a ping-pong training center.

I had already written up several Party Congress articles, and decided to go along more as a weekend diversion. I was willing to brave a few turgid speeches by local party secretaries and maybe a regimented performance of a patriotic song in exchange for a free ride to some sites off the beaten path; after all, I’ve never been inside an old steel factory furnace. Perhaps in spite of all the stage-managing, I thought, I’d meet some interesting journalists, or find a kernel of an idea for a kitschy feature story. What I wasn’t prepared for was becoming the story.

Forty-five minutes into our first stop -- an old Shougang Group steel factory on Beijing’s western outskirts that officials hope to make into an arts district and something called a “comics, animation and game city” -- I had been approached not only by Shougang’s in-house TV crew documenting the visit, but also by representatives from the official New China News Agency, Sinovision New York and China Radio International. Though I think it’s both lazy and boring to interview fellow reporters, these media reps had no such qualms.

Some wanted to talk about the steel plant. Others wanted to ask my opinions about the 18th Party Congress. I wasn’t alone. A Japanese writer and an American radio journalist were besieged too. Truth be told, these reporters were in a tough spot if their editors were expecting the tour to yield a compelling story, but I really didn’t see how we could help them. I tried to demur, or when that didn’t work, I offered really vague, dull responses.

Gradually, it became evident that many of these reporters were under orders to write up stories about the visits -- not about what they saw, but who was with them, taking in the achievements and grand plans of the party. The American radio reporter, for instance, would become the lead for a scintillating piece on the People’s Daily website headlined, “Foreign reporters eye diverse issues at congress.” 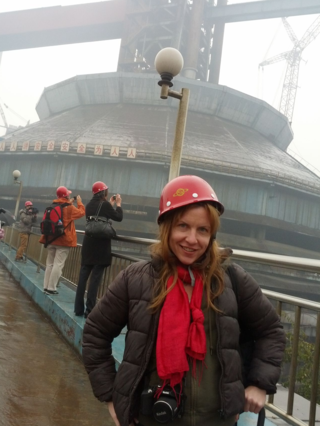 As we were led up into a massive smokestack-like contraption that was closed in 2010, we were all given red hard hats. That was the cue for the crew from state-run CCTV: Spotting me in my headgear, they turned tail on the local party official reciting facts on steel production. The cameraman fired up his lights, an assistant popped forward to straighten my cap, and a reporter thrust a microphone toward me.

“How many stories will you write about the 18th Party Congress?” she asked, ignoring the official giving his speech.

I scratched my head, mumbled and looked off camera, doing everything short of picking my nose in an attempt to make the footage completely unusable.

The next day, I came back prepared with a more aggressive strategy, or so I thought. Fifteen minutes into a tour of the Bazhou city museum in Hebei province, another CCTV crew approached me. “What are the critical issues of the 18th Party Congress?” the reporter queried.

“Tibet, corruption, the purge of politician Bo Xilai, and questions about Premier Wen Jiabao’s $2.7-billion family fortune,” I said with a smile, knowing that there was no way that answer, laden with hot-button subjects, would make it on air. The reporter frowned.

I thought I had escaped. I fended off further advances, from Hebei radio, Hebei TV and other outlets. Little did I know, there was one last brilliant trap waiting for me.

It was at the Bazhou City theater. Right after we “stumbled” upon some senior citizens rehearsing a song called “Without the Communist Party, There Is No New China,” we were led upstairs to a gallery documenting the works of a local Peking opera hero. After that, we were taken to a Peking opera theater on the fourth floor.

Tea was poured. Some local elementary school kids performed acrobatic stunts. The vice mayor of Bazhou belted out a tune. Then, a few reporters were invited on stage to try out some musical instruments.

I sat in the audience, checking my phone and thinking about lunch. Suddenly, the emcee called out from the stage, breaking from rapid-fire Chinese.

“Hello!” he bellowed in English.

I looked up. Yep, he was talking to me. I shook my head twice, three times. But the rest of the press herd knew if I were to go on stage, they’d get their shot of the day. A few shouts of encouragement went up. At this point, even if I had bolted for the exit, I’m pretty sure I would have been tackled.

A sinking feeling came over me as I assessed the score and mounted the stage: Communist Party Propaganda Machine, 1; American journalist, zippo.

I smiled at the emcee. The other reporter on stage, a Chinese guy, mumbled to me in English that this was awkward. Peking opera costumes were presented. Wouldn’t we like to try them on? Oh, and how about trying to sing too?

Cameras clicked. Videotape rolled. I would end the day without a decent story in my notebook, but the Chinese press went home delighted.

The next day, a British friend emailed me with unrestrained schadenfreude. “Fame and Glory,” he poked, forwarding links from the media center’s official website. “You are officially the (white) face of the Party Congress!”

I opened the link. The main headline blared: “The 18th Party Congress news center organizes Chinese and foreign reporters to visit Hebei’s Bazhou City and have a look and gather news!” Underneath it, there I was, in all my Peking opera finery. Oh, the horror.

My mood quickly changed, though, when I saw just how long the article was: eight pages, documenting every last tedious inch of the cultural sites of Bazhou City. I wondered: How many more such reports is this poor writer  going to have to churn out between now and the end of the Party Congress on Nov. 15?

Being included in a propaganda piece is a momentary ignominy. But I’m counting my lucky stars: It sure as heck beats having to write them.

Spain puts off burning all of its 'bridges'

Photos: Your humble correspondent, top, on stage Sunday at the Liu Xiaochun Small Opera Tower in Bazhou City,  and bottom, on site Saturday at the Shougang steel works' third furnace, which closed in 2010. The factory has been relocated outside Beijing, and there are plans to redevelop the area with commercial and residential projects.