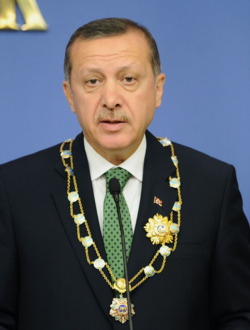 The passenger plane, which was coming from Moscow, was held on the ground for several hours Wednesday as Turkish authorities searched the plane and seized 10 boxes before allowing the flight to continue to Damascus, the Syrian capital. Its cargo apparently was destined for Syria as well.

Syria has denied the plane, a Syrian Air Airbus A320, was carrying any weapons or prohibited goods.

Turkey said it had intercepted the plane based on national and international rules and regulations.

"The cargo was not suitable for a civil plane under international rules and regulations,” said Transportation Minister Binali Yildirim, the official Anadolu news agency reported. "An air space must be utilized for peaceful purposes. Otherwise, we will use our rights stemming from national and international laws. We used the rights on Wednesday and will use them in the future whenever necessary.”

The incident comes amid increasing tension between the two countries as Turkey has traded mortar fire with Syria in recent days, a week after a Syrian shell killed five people across the border. Turkey’s top military commander warned Wednesday that his country would respond forcefully to any further shelling of its territory.