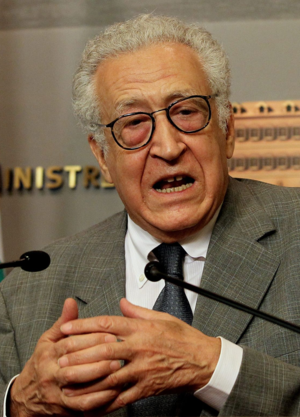 BEIRUT -- The United Nations envoy to Syria continued Wednesday to push for a four-day cease-fire in the fighting and called it a "microscopic" step toward ending a conflict that could consume the entire Middle East, news agencies reported.

Lakhdar Brahimi was in Beirut in attempt to gather more support for a temporary truce between government and rebel forces during Eid al-Adha, a Muslim holiday. He told reporters that the rebels have said they would observe a cease-fire if it is initiated by the President Bashar Assad's government.

"The Syrian people are burying hundreds of people each day, so if they bury fewer people during the days of the holiday, this could be the start of Syria's return from the dangerous situation that it has slipped and is continuing to slip toward," he said, according to the Associated Press.

Since he took over in August for former envoy Kofi Annan, Brahimi has been publicly candid about what he says are his slim chances of brokering peace in Syria.

Syrian Foreign Ministry spokesman Jihad Makdessi said that any initiative would require commitment by all sides. He blamed the unraveling of previous agreements -- namely a six-point peace plan proposed by Annan -- on opposition groups and countries that support them.

The leader of the Syrian National Council, an opposition group made up mostly of exiled Syrians, said that if the regime abided by a four-day cease-fire, his group would as well. But the council, which has been criticized for not being representative of the opposition inside Syria, has little influence on the ground.

Even with what rebels have supposedly told Brahimi about observing a cease-fire, few observers expressed any optimism. Past attempts at similar suspensions of the fighting have failed, and the country has only plunged deeper into the conflict.

Abu Samir, a commander with the Damascus-based anti-government Sahaba militia, one of the largest in the capital, laughed when asked about the prospect of a cease-fire.

"If it happens that would be great. We don't have a problem with a temporary cease-fire, especially for Eid for people to relax," he said. "But we can't agree to a long-term cease-fire because we are in a revolution."

He said he was doubtful the regime would abide by a temporary truce, but that the opposition was willing to try. He also said that he did not expect all the rebels to cooperate because they lack a unified command.

On Wednesday, activists posted a video showing what they said was a government helicopter shot down by rebels over the northern city of Maarat Numan. The city, which is strategically located on the main highway connecting Aleppo and Damascus, has been the site of ongoing clashes and shelling for a week after rebels began an offensive to get rid of government checkpoints.

On Tuesday, the city came under intense air attacks from warplanes and a neighborhood was destroyed, said activist Ahmad Halabi.