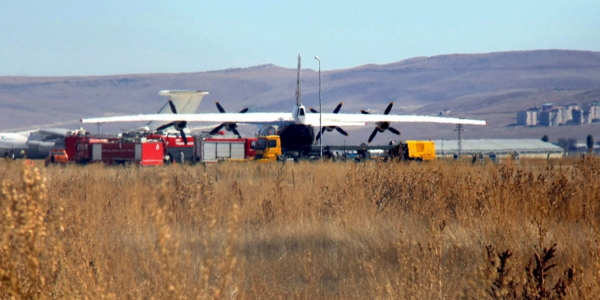 BEIRUT -- A plane headed from Armenia to Syria that was grounded and searched Monday in Turkey was carrying only humanitarian aid, the Turkish foreign minister said.

After the plane's cargo was examined it was allowed to continue to the besieged city of Aleppo, the official Anadolu news agency reported.

It was the second time in a week that Turkey ordered a plane to land in an attempt to prevent weapons from being sent to the regime of Syrian President Bashar Assad. Armenia requested to use Turkish airspace and was granted permission on the condition that its cargo be searched.

Last Wednesday, a passenger plane heading from Moscow to Damascus was forced to land amid suspicion that it was carrying weapons. Turkish Prime Minister Recep Tayyip Erdogan said the plane was carrying ammunition, and other reports said it contained military communications equipment.

On Saturday, Turkey announced that it was closing its airspace to Syrian civilian flights. Earlier, it had barred Syrian military flights from flying over Turkey.

Scotland to vote on independence in 2014

Turkey grounds another plane heading to Syria amid tensions