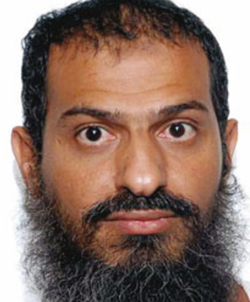 Yemeni defense officials said Monday that the second in command of an Al Qaeda offshoot based in their country was killed along with six other alleged terrorists.

Said Shihri was killed in an operation carried out by the Yemeni military in the Hadramout valley, the Defense Ministry said in a statement on its website. The ministry identified Shihri as a Saudi national and stated that his death was “a painful blow” to the militant group.

Though the statement said Yemeni forces had carried out the operation, defense officials told the Associated Press that Shihri and his companions had been killed when a missile fired by a U.S.-operated drone struck their car.

American officials had yet to comment publicly on the claims early Monday. Yemeni officials have erroneously announced the killing of Shihri in the past.

Shihri was once imprisoned at Guantanamo Bay and later transferred to Saudi custody, where he was put into a rehabilitation program. After his release, however, he reappeared in extremist networks in Yemen, issuing recorded messages to followers. The U.S. has accused him of being involved in a deadly attack on the American Embassy in Sana.

Al Qaeda has become increasingly decentralized as its core has been weakened by killings of top leaders such as Osama bin Laden. The Yemeni branch, Al Qaeda in the Arabian Peninsula, is now widely seen as the biggest terrorist threat to the United States.

The U.S. has escalated a clandestine war against the militant group using drones, a controversial tool that American officials have defended as the best way to target extremists. Critics argue that drone killings of civilians could end up recruiting more terrorists than they eliminate. Such attacks have increased sharply under Yemeni President Abdu Rabu Mansour Hadi, who took office in February.

Besides the reported killing of Shihri, the head of a separate Al Qaeda affiliate active in North Africa was reported to have died Monday in a car crash near Gao in northern Mali. French media reported the accident killed Nabil Makhloufi, the leader of Al Qaeda in the Islamic Maghreb.

U.S. turns over control of Bagram prison to Afghan authorities