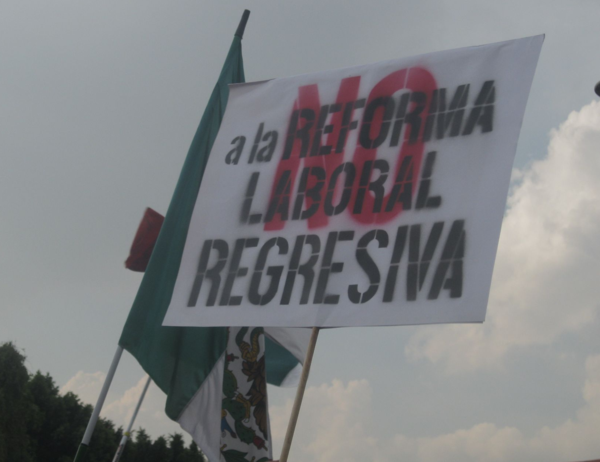 MEXICO CITY -- Mexico's lower house of Congress has passed a major labor-reform law -- the first changes in employment regulations in Mexico since 1970 -- that would alter the way bosses and employees interact before, during and after a job.

"It's possible that there could be more jobs, but at miserable wages, with exploitation of workers," Torres said during a large union rally. "It would hurt all of us."

The outgoing administration of President Felipe Calderon, which succeeded in passing the bill with help from the party of incoming President-elect Enrique Peña Nieto, said the law would boost job rolls and competition in the labor market.

For union members, the measure -- which is now on its way to Mexico's Senate -- would strip workers of what they called few relative benefits they enjoy under existing regulations, which they argue favor employers and large companies anyway.

The reforms would permit bosses to hire workers for trial periods and to base promotions on productivity, not seniority. The law also would ease the firing process and permits hourly wages, instead of the day-wage of existing law.

The hourly-wage portion of the new law seemed to crystallize the complaints for Torres and throngs of organized workers and professionals who were rallying on Thursday outside the lower house, the Chamber of Deputies, ahead of the vote. If anything, it reminded union members how little workers make in Mexico's economy.

Minimum wage in Mexico was raised 4.2% this year to 62.33 pesos per day, in the highest of three region-based brackets. For an eight-hour day, that comes to a grim-looking 7.79 pesos per hour -- or about 60 cents.

The measure would not alter the daily minimum wage, which is set by Mexico's Labor Ministry. But opponents fear that employers will use some workers for only a few hours a day and pay them at the hourly rate.

"They pay us so low, and they would pay us even lower by the hour," said Torres, a member of the telephone workers union.

Torres stood among members of unions actively opposed to the bill before it passed early Saturday --telephone workers, jobless electrical workers, and former pilots and flight attendants of the defunct Mexicana airline.

"What do you mean we want competition?" asked Juan Jose Reyes, 52, an unemployed electrical worker since 2009, when the Calderon administration disbanded and replaced the Luz y Fuerza utility.

"If there is no education, no work, and thus no money, so what are we competing with?" Reyes said. "It's like going to war without a weapon."

These union members' impassioned opposition to the law pitted them against other larger unions more beholden to political deals tied to elections.

The Institutional Revolutionary Party (PRI), which is set to return to Mexico's executive branch under Peña Nieto and racked up seats in Congress in the July 1 election, was opposed to the provisions of the Calderon reform that would seek transparency in unions' internal elections.

The major unions, such as the national teachers union led by the feared leader Elba Esther Gordillo, are widely regarded as corrupt, wasteful, and often in electoral alliances with the PRI.

In the revision process for the reform bill last week, those union-transparency portions were in effect removed. The law passed just before 4 a.m. Saturday after a divisive and often dramatic debate in the chamber. It must still pass the Senate before being enacted.

Leftist-coalition legislators called the bill "treason" and "occupied" the chamber's dais, forcing the president of the lower house to conduct some of the debate from a tiered balcony.

But for all their protesting, the left could do little against the majority posed by the PRI and Calderon's right-leaning National Action Party. The bill passed with 346 votes in favor and 60 against, plus one abstention.

Photo: A sign against the proposed labor-reform measure is raised outside the Chamber of Deputies in Mexico City on Thursday. Credit: Daniel Hernandez / Los Angeles Times