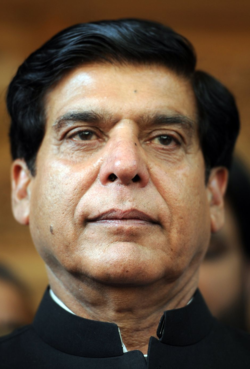 ISLAMABAD, Pakistan -- For the second time this year, Pakistan's Supreme Court is setting the stage for a potential contempt case against the country's prime minister for ignoring its order to revive longstanding graft proceedings against President Asif Ali Zardari, escalating a contentious standoff between the judiciary and a civilian government struggling to complete its term in office.

A five-judge panel of the high court on Wednesday ordered Prime Minister Raja Pervez Ashraf to appear in court Aug. 27 to explain why a contempt case should not be opened against him. The court's actions mirror its handling of Ashraf's predecessor, Yousuf Raza Gilani, who also refused to pursue corruption proceedings against Zardari, his longtime ally.

The high court convicted Gilani of contempt and on June 19 ousted him from office. Ashraf replaced him three days later.

Like Gilani, Ashraf is also a top figure within Zardari's ruling Pakistan People's Party, which in recent days has made it clear that the government has no intention of complying with the high court's order because of its belief that as president, Zardari enjoys constitutional immunity from prosecution.

Since 2009, the high court, led by Chief Justice Iftikhar Mohammed Chaudhry, has been pushing the government to write a letter asking authorities in Switzerland to reopen a case involving allegations of kickbacks in that country for which Zardari and his late wife, former Prime Minister Benazir Bhutto, were convicted of in absentia in 2003.

They were accused of taking kickbacks from Swiss companies during Bhutto's rule in the 1990s. The case was on hold while the couple appealed, and was dropped at the request of the Pakistani government in 2008.

Many observers believe Chaudhry's pursuit of the graft case against Zardari reflects the intense animosity clouding their relationship ever since Zardari's ascent to the presidency in 2008. At that time, Zardari resisted reinstating Chaudhry, who had been removed as chief justice earlier by the country's former military leader, Pervez Musharraf. Zardari feared that Chaudhry would seek a reopening of the Swiss graft case if he were reinstated. Eventually Zardari gave in, following massive displays of popular support for Chaudhry.

The conflict with the Supreme Court is just the latest in a long line of crises for Zardari's government, which has endured frequent tussles with the country's powerful military and has struggled to tackle Pakistan's most pressing problems, including a stagnant economy and power outages that rob many cities and towns of electricity for more than 12 hours every day.

Nevertheless, Zardari's team is striving to be the first civilian government to complete its term in a country with a history of military takeovers. National elections are slated to take place in early 2013.

Iran on diplomatic blitz to free hostages in Syria

-- Alex Rodriguez and Nasir Khan. Khan is a special correspondent.