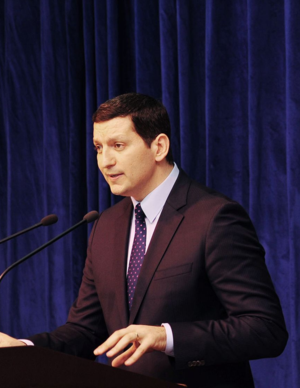 JERUSALEM -- As Israel ramped up its threat to destroy Syria’s chemical weapons cache, Syria’s embattled government said Monday that its weapons were secure and they would not use them -- unless provoked by an outside attack.

“No chemical or biological weapons will ever be used, and I repeat, will never be used, during the crisis in Syria no matter what the developments inside Syria,” Foreign Ministry spokesman Jihad Makdissi said during a news conference broadcast on state television. “All of these types of weapons are in storage and under security and the direct supervision of the Syrian armed forces and will never be used unless Syria is exposed to external aggression.”

The comments, which were widely viewed as Syria’s first official acknowledgment that it possesses such weapons, came after Israeli Prime Minister Benjamin Netanyahu issued his sternest warning yet that Israel might take action to prevent Syria’s weapons from falling into the hands of Hezbollah in Lebanon or Islamic extremists.

Netanyahu said Israel is particularly worried about what might happen to the stockpiles in the event that the Assad regime falls and the country descends into chaos or civil war.

“This is something we’ll have to act to stop if the need arises," he told Fox News on Sunday. “And the need might arise if there’s a regime collapse, but not a regime change, that is you go into some chaos and all these sundry sites are left unguarded.”

Israel is trying to walk a fine line between ensuring its security and avoiding being dragged into the Syrian conflict. Thus far it has avoided any direct military intervention in the Arab Spring that has unsettled most of its neighbors.

A military strike against Syrian weapons stockpiles might backfire for Israel, some warn.

Syria expert Eyal Zisser of Tel Aviv University predicted such a strike would not cause a major backlash, either from the Arab world or the international community, since many other countries are also worried about Syria’s weapons falling into the wrong hands. But he said it would likely create tensions between Israel and whatever new regime takes control in Syria.

U.S. officials have been urging Israel to use restraint even as they make their own contingency plans to ensure the weapons are not smuggled out.

According to one French report, U.S. and Jordanian forces are closely monitoring the situation. Last week, Jordan’s King Abdullah II warned that such weapons could fall into the hands of Al Qaeda.

“One of the worst-case scenarios -- as we are obviously trying to look for a political solution -- would be if some of those chemical stockpiles were to fall into unfriendly hands,” he told CNN.