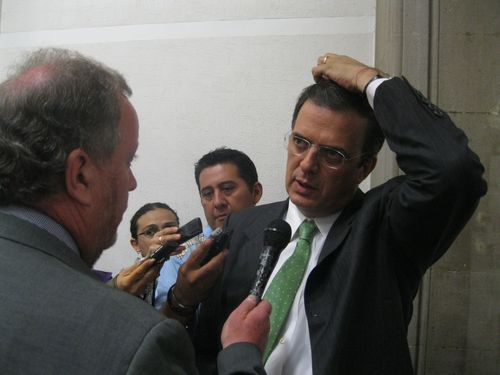 REPORTING FROM MEXICO CITY -- Mexico City Mayor Marcelo Ebrard says that if elected president he would remove his nation's military forces from the fight against violent drug cartels and seek a dialogue with policymakers in the United States over narcotics laws in both countries, which he called "schizophrenic."

"If the United States is legalizing marijuana and we're over here killing ourselves on the street over marijuana, that does not make sense," Ebrard said Tuesday, referring to U.S. states, such as  California, that have sought to decriminalize the sale and use of cannabis.

In Mexico, Ebrard noted, drug consumption is legal in small amounts, while production and distribution is not.

More than 40,000 people have been killed in Mexico's drug war since the conservative President Felipe Calderon sent the armed forces to battle the cartels in late 2006. But his government, in 2009, also proposed the law decriminalizing drug use.

"The law is very confusing and very inefficient," Ebrard said. "We need to have a common policy with the United States, because if not, we have a schizophrenic scheme that is very costly for Mexico."

Ebrard made the comments during a lengthy round-table interview with foreign media reporters at City Hall. The event marked the release of a glossy book published by the city government that hails the accomplishments of Ebrard's term as mayor in areas such as transportation and the environment.

Ebrard, a leftist who has proven popular in Mexico City, is seeking to position himself as electable on a national level, where he is largely unfamiliar to outside voters.

His chief hurdle to capture the nomination of the Democratic Revolution Party is the former Mexico City mayor, Andres Manuel Lopez Obrador. The PRD presidential candidate from 2006 still commands a passionate base of support nationwide, despite being marginalized after refusing to recognize Calderon's government.

To solve the split, both men said they would honor a poll asking voters who they would prefer to represent Mexico's left in the 2012 race. The results of that poll -- the elements of which were carefully negotiated between the two camps -- could come by the end of the week.

Pressed about his drug and security policy if elected president, Ebrard said he would remove the military from the streets and seek to build up state police forces that could tackle trafficking and corruption locally. He'd also seek to reform the judicial system.

Calderon has said the military should stay on the job until Mexico has cleaned up its graft-laden police forces, which are most troubled at the state and local levels. He won approval of a judicial reform bill in 2008 that, among other things, would bring U.S.-style oral trials to Mexico. Other reform proposals have been held up by a slow and sometimes uncooperative Mexican Congress.