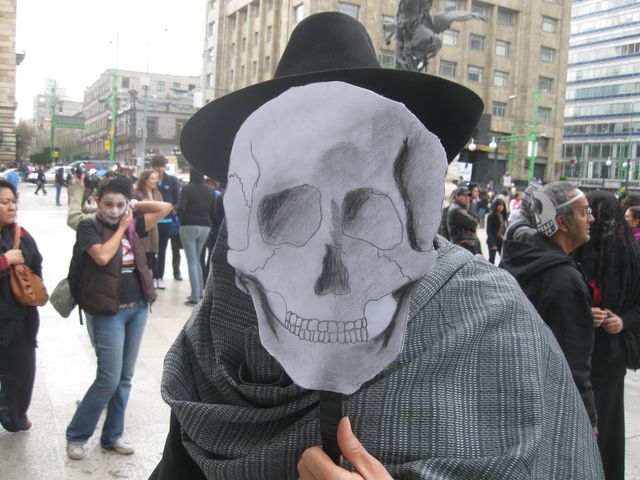 REPORTING FROM MEXICO CITY -- It was billed as "the first act of collective psycho-magic in Mexico."

The call made by the cult mystic Alejandro Jodorowsky said the event would seek to "heal" the country of the cosmic weight of so many dead in the drug war, by gathering for something he called the March of the Skulls.

On Sunday, on a wet and frigid morning in this mountain capital, hundreds of Jodorowsky fans answered the open convocation (video link in Spanish).

They donned black top hats and black shawls, and carried canes and Mexican flags colored in black. They wore calavera face paint or masks to give themselves the look of stylish skeletons gathered in this often-surreal city in the name of Mexico's tens of thousands of sometimes nameless drug war dead.

"Long live the dead!" they shouted.

Truthfully, the Marcha de las Calaveras was a minor weekend event compared to the city's heavily publicized "zombie walk" the day before, in which almost 10,000 people playing zombies marched through the city's core. That event marked yet another one of Mexico City's recent obsessive hobbies: breaking Guinness world records.

Yet for the estimated 3,000 people who showed up to the Jodorowsky march over the course of the day, it was significant as a rare public appearance in Mexico by the Chilean-born filmmaker and tarot guru (link in Spanish). Jodorowsky lived in Mexico for many years and produced his most well-known works in the country, the films "El Topo," "Santa Sangre," and "The Holy Mountain."

The event also demonstrated that Mexicans seem willing to try almost anything at this point -- even a counterculture-era act of public mysticism -- to seek an end to the awful violence brought by the fighting between the government and the cartels, a war that has cost more than 40,000 lives since December 2006.

"The young people's call is another form of saying, 'Enough.' Enough deaths," said Angelica Cuellar, a 63-year-old teacher. "Through the psycho-magic, we are saying, for this moment, we are them."

Her sister, Dulce, standing nearby, said: "I am here in the name of someone who didn't have a voice, someone who was suffocated, someone who went north searching for work. I say, 'I'm here for you.'"

"And if we do it collectively, I assure you, at another level of energy, those dead will come awake," added Dulce Cuellar, 60.

Walking skeletons milled about in the background on the steps of the downtown Palace of Fine Arts, as the crowds eagerly awaited Jodorowsky's arrival. Perhaps out of boredom, or inspiration, some mimicked the mournful howl of the native xoloitzcuintli dog, man's guide to the underworld in Aztec mythology.

(There were also a few deep incantations of "om.")

The "maestro" arrived at the palace steps about 1:30 p.m., causing brief havoc among the gathered calaveras as people jostled to get near him. The white-haired Jodorowsky, fit and agile at 82, wore a black sports coat, a bright purple scarf and a detailed skull mask.

Along with his family, Jodorowsky led the calaveras up the Eje Central avenue to Plaza Garibaldi in a mostly silent demonstration. In the late 1980s, he filmed some key scenes of "Santa Sangre" at this plaza, homebase for the city's for-hire mariachi bands. On Sunday, it was easy to imagine another "Santa Sangre" scene being filmed during the march, but this time from a dark and unfamiliar future.

Someone decided the group should sing a song. It became "La Llorona," the Weeping Woman.

Jodorowsky was displeased with the group's initial interpretation, so he asked for another go at it. A mariachi band joined in as accompaniment.

"There are 50,000 dead beings," Jodorowsky said through a bullhorn, before the sea of skulls. "They are sheep. They are not black sheep. We must have mercy for these souls that have disappeared. Let's sing this song with lament, as if we were the mother of one of these persons. Understand?"

Then he asked that all those present cross and link their arms with those of the strangers around them. The group did. They chanted "Peace, peace, peace!" until Jodorowsky asked that everyone let out a big laugh. Laughter and applause followed.

Heavy turnout as Egyptians go to the polls

Pakistan denies it fired first in NATO attack that killed 24