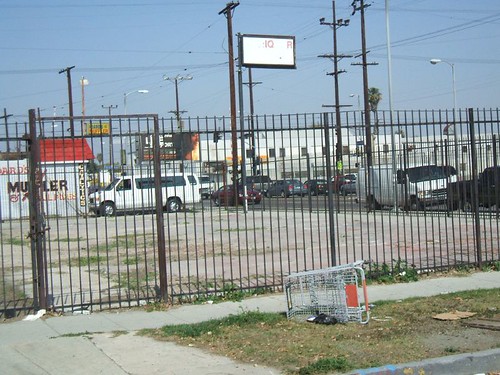 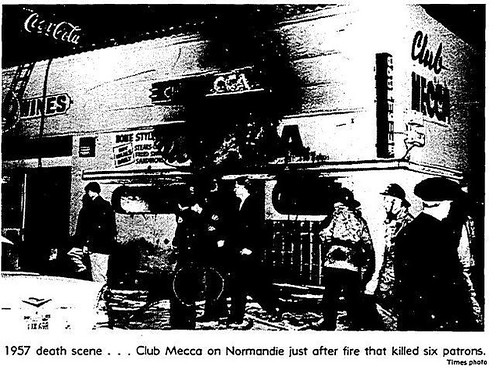 Six juiceheads: That's how they're cast in our film noir tale about one of the biggest Los Angeles crimes of the 1950s. But it's not that easy. History never is.

At 20 minutes to midnight, four men who had been thrown out of the Club Mecca, 5841 S. Normandie Ave., came back with an old five-gallon paint can full of gasoline. One of them, an ex-convict, threw the gas into the bar like a cleaning lady pouring out her mop bucket; another, a delivery driver for a bindery,  lit a matchbook and tossed it onto the gas-soaked carpet. The small neighborhood bar, 25 feet square packed with 21 people, exploded in flames.

Firefighters found one victim still sitting on a bar stool, so badly burned it was days before he was positively identified. Four other men and one woman died, and the rest survived, one of them with severe burns.  At the time, police called it the biggest mass murder in Los Angeles history.

Detectives found one of the killers, Clyde Bates, 36, and his companion, Oscar Brenhaug, 44, sleeping off a drunk in a blue Plymouth sedan parked in the driveway of Bates’ home at 1623 S. Menlo Ave. Investigators eventually arrested the other two men, Manuel Joseph Hernandez, 18, and Manuel Joseph Chavez, 25.

Of course, they all had alibis. Chavez said he went home from the bar and didn't know anything about the fire until he read about it in the papers. Bates and Brenhaug said they were at another cocktail lounge until it closed at 2 a.m. Hernandez said he couldn't get served because he was underage. Otherwise, he couldn't remember what happened.

Joyce Chapdelaine, 22, a Mecca waitress, said she danced with Bates briefly while Hermina Morales, 28, danced with one of the other killers. The men became abusive and after a brawl with two bar employees and a customer, three of the suspects were thrown out. In the brand of logic known only to drunks, they returned to the bar to insist that a fourth companion also be thrown out and bartender Larry Fenton complied.

The men went to a Union Oil station at 5720 S. Vermont Ave., filled an old, dirty bucket with gas, then returned to the club. Bates pitched $1.43 worth of high-octane revenge into the bar and Chavez lit the matchbook.

“I was sitting on the third stool near the door,” Joseph Marriott said, “when I felt something hit my pant leg and run down into my shoes. I thought it was a friend playing a joke—squirting me with a hose.

“My leg and shoe were saturated. I turned and saw the guy striking the match. It was a book of paper matches and he struck the match two or three times. That’s all I remember—I had troubles of my own after that.”

So who were Ellroy's juiceheads?

Crawshaw's services were held in Seattle and Robinson was buried at Inglewood Park Cemetery. Gonzalez and Maytorena received Requiem Masses at St. Vincent's Catholic Church and were to be buried next to one another at Calvary Cemetery. MacInnes' Requiem was held at Nativity Catholic Church and she was buried at Holy Cross Cemetery, The Mirror said. After rites at St. Brigid's Catholic Church, about 300 people attended Smaldino's burial at Calvary Cemetery, with several of them surging forward to restrain his mother as she threw herself on his casket.

Now for the lowlifes.

Claiming that he was too drunk to have helped plan the bombing,    Brenhaug turned state’s evidence and the case against him was dismissed for lack of evidence. Hernandez was sentenced to life in prison and vanished from the pages of The Times a few years later.

Bates and Chavez were sentenced to die in the gas chamber at San Quentin, and in 1960, they got into a Death Row brawl with Red Light Bandit Caryl Chessman and convicted killer James Merkouris over watching the Rose Bowl on TV. But in 1966, Gov. Pat Brown commuted their sentences, giving Chavez life in prison and Bates life without the possibility of parole.

In 1972, the state Supreme Court scrapped the death penalty, further reducing Bates' sentence to life in prison. A final Times story says Bates was scheduled to be paroled in March 1977. Chavez had already been freed and was working in Sacramento as a counselor for ex-offenders.

A year after the fire, Spinelli and Fenton were married. In 1959, she and the survivors of several victims won a lawsuit against Union Oil and the men who sold the gasoline to the killers, but it was overturned on appeal. Times reporter Gene Blake, writing a postscript in 1976, noted that he was unable to locate Barbara Fenton, but quoted her reaction to Brown's clemency ruling: "I really feel that they should have been given the death penalty."

Blake also noted that the Club Mecca had been torn down to make a parking lot for a liquor store--a liquor store that was a mile north of Florence and Normandie, the flashpoint of the 1992 Los Angeles riots, when most of South-Central was in flames. Today, 5841 S. Normandie Ave. is nothing but a pockmarked concrete slab surrounded by a strong metal fence. The only thing left is a sign. Most of its letters are missing, but it looks as if it once said: "Lee's Liquor. Hamburgers."

There is no happy ending in this story, no stern-voiced narrator intoning the prison terms of the guilty as there was in "Dragnet." Six people died and the killers got out of prison. Memories fade, but as Barbara Fenton said: "I still have a few scars and I'm a little self-conscious about them. The scars will remain the rest of my life." 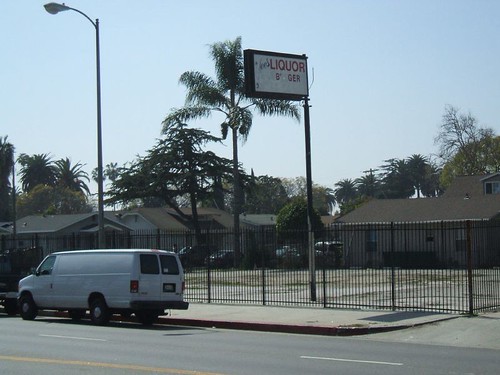