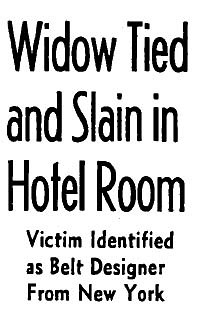 Ruth Newgarden Goldsmith, 52, a New York fashion designer, had been dead about 12 hours when she was found after 3:30 p.m. by two maids in a $25-a week room at the Hollywood Algiers Hotel, 445 N. Rossmore Ave. on the edge of the Wilshire Country Club.

Goldsmith, a widow who gave her address as 15 Christopher St., New York, N.Y., had checked into the Algiers a month earlier. According to police, she made frequent business trips to Los Angeles, selling belts out of her hotel room. Her hands were tied with a silk stocking and she apparently suffocated on a washcloth forced into her mouth and held in place with another silk stocking. 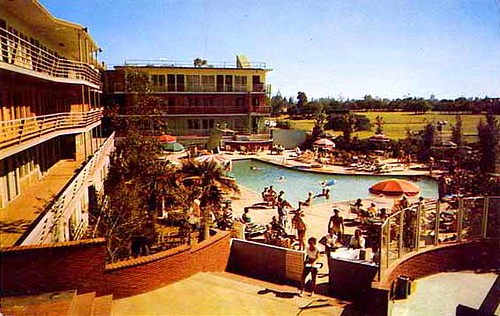 The Hotel Algiers, formerly the Casablanca and the Country Club Hotel

There were traces of cold cream on her face, leading authorities to believe she was getting ready for bed when she was killed. Her light green negligee was "disarranged," but there were no outward signs of a "criminal attack," The Times' delicate term for a brutal crime. The only sign of a struggle was shoe prints on the rumpled bed, Detective James Close said.

Investigators found that her wallet was empty and although acquaintances at the hotel said she had expensive-looking jewelry, nothing was found in a search of her room. Her bank books showed that she sometimes withdrew as much as $2,000 ($14,330.57 USD 2006). Police said she had frequent business callers and kept a display of belts in her room.

Marine Pvt. Brad Arnold and his father, Charles, who had a room a few doors down, said Goldsmith was a quiet woman of excellent character.  In an interview, Charles Arnold said Goldsmith was trusting and "took everyone at face value. If someone came to her door she would have let them in." He added, "She had no enemies and lived very quietly. She usually went to the movies by herself."

Her only apparent survivor was a son named Walter, described as a Korean war veteran who was studying law at New York University.

The Internet can tell us a few more things about Goldsmith. She was born Dec. 28, 1904, her father's last name was Newgarden and her mother's maiden name was Schwartzenberg. The New York Times appears to list an engagement announcement of Walter George Goldsmith and Ruth Newgarden, daughter of Dr. and Mrs. Albert Newgarden, 151 W. 86th St., on Oct. 4 and Oct. 11, 1925. The New York Times also shows a company called Coordinated Accessories of 15 Christopher dealing in belts and accessories declaring bankruptcy in May 1957 under the name Benjamin Weintraub.

A little more digging shows that Albert Newgarden had a brother George J. Newgarden, whose obituary appeared in the New York Times on June 5, 1931. According to World War I draft records, a man named Walter George Goldsmith lived in Essex, N.J., but it's unclear if was her husband. 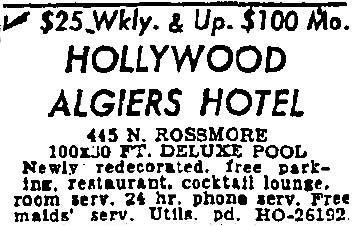 All right, armchair sleuths, there's a real unsolved case from the archives with everything available from the initial reports in The Times and the Mirror.

Maybe it's just me, but something doesn't add up here. We have a quiet, well-behaved woman of excellent character who goes to movies by herself and yet has an extraordinary number of business clients who visit her hotel room ostensibly to buy her custom-designed belts. I would suspect something else, but according to the bankruptcy filing, there was a belt company at the address she gave.

One curious note: In 1950, a judge ruling in a case brought over alterations done without the proper permits said the Algiers looked like "a glorified quickie motel."