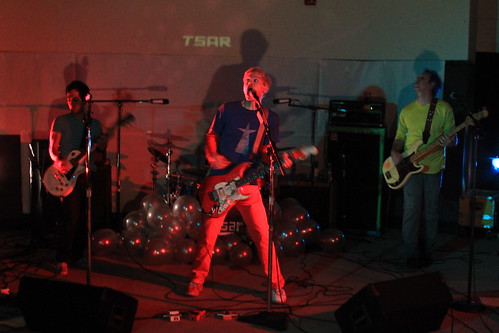 The original lineup of rock group Tsar reunited yesterday and played a set at the Los Angeles Times that included two new tunes. Los Angeles natives, Tsar was signed to Hollywood Records back in 2000 and had its self-titled debut produced by Grammy winner Rob Cavallo. Since then, the band released an EP, 2002's "King of the School," and a full-length, 2005's "Band-Girls-Money."

Along the way, the band lost its rhythm section and switched lineups, but yesterday the original members returned -- with gusto. In the coming days, Pop & Hiss will post video from a session at the LAT HQ, with Jeff Whalen and Dan Kern on guitars, Steve Coulter behind the drums and Jeff Solomon on bass. When asked where the act, winners of the LA Weekly award for best local band back in 2001, has been, Whalen quipped, "On the moon."

In the meantime, listen and download a new song, "Girls (Try To Be Cool)," below.

Full disclosure: Tsar are good friends with the author of this post.