The press release said it was the grand opening of a car dealership in the Valley.

It also said there would be classic cars, some new muscle cars and a few futuristic-looking speedsters. And that Wolfgang Puck would provide the catering.

Despite such hype, there must be something very wrong with me, my cohorts, my friends and life in Southern California in general. Nearly everyone I know who got the invite passed on it. I even passed on it, until I realized I had nothing better to do Saturday night.

What I nearly missed was the best damn car dealership grand opening anyone could have ever hoped for.

The 405 was backed up near the Van Nuys exit of Roscoe Boulevard because, apparently, the rest of the invitees were clearly not as jaded as I. They were on time, they looked good and they were ready to rock. The invite said attire was "California Cocktail," which meant attendees climbed out of their cars in suits and little black dresses.

Free valet took their cars, a red carpet led the way, and inside the gates of Galpin Auto were dozens of hot rods, famous movie and TV cars, including the Batmobile, free pinball and video games, and several free bars.

This wasn't just any Galpin, I learned. This was Galpin Auto Sports, or GAS, the place MTV's "Pimp My Ride" customizes clunker cars and turns them into sweet mobiles. Pictured below are a number of the items available for auction, with proceeds going to multiple charities.

As a sign of the times, it was painful to see the autographed Jonas Brothers guitar going for a much higher price than the Foo Fighters guitar, or a cymbal signed by Rage Against the Machine. A Stratocaster, signed by members of the Rolling Stones, sold for a little more than the Jo Bros' autographs, so there was some justice.

But there was also much rock.

Navarro and Camp Freddy have been hosting all-star jams for years now. Most recently, they had a residency at the Roxy, where stars such as Chrissie Hynde, climbed onstage to join the band.

On Saturday night, Camp Freddy played the role of the backing band to some pretty top-shelf artists. They started by calling out Billy Duffy of the Cult for a rollicking rendition of "Fire Woman."

Remember the first season of "American Idol?" Ryan Starr brought out a Pussycat Dolls-like group called the Darling Stilettos who danced and sang to a rendition of AC/DC's "Girl's Got Rhythm." 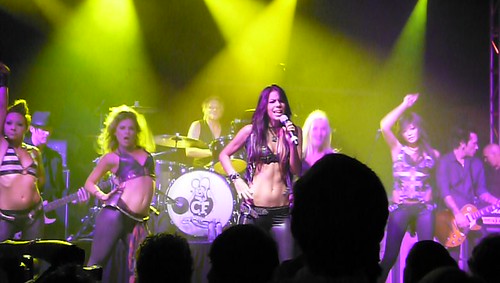 Next up was Gray, who impressively covered the White Stripes' "Seven Nation Army." With Navarro on lead guitar, and Macy doing her thing, it more than rivaled a version from Alice Russell and Nostalgia 77.

The only clunker of the night was "Sugar Ray's" McGrath, who sang the Sex Pistols' "EMI" with Steve Jones on guitar. Jonesy played most of the tune (and the follow-up, the Bowie classic "Suffragette City") with his back to the crowd. Was he embarrassed, perhaps, to have to back up an "Extra" host?

Soon after, Cypress Hill took the stage and did "(Rock) Superstar," with a rhythm perfectly riffed by Navarro. Things improved when Slash joined the group, and Cypress Hill's B-Real and Sen Dog sang "Paradise City" with the former Guns N' Roses guitarist on one side, and the Jane's Addiction guitarist on the other. With another former Guns N' Roses member, drummer Matt Sorum, it was a rock 'n' roll dream come true for anyone who misses the heyday of the Sunset Boulevard scene.

For this blogger, the only thing that could have topped it was Ozzy.

And boy did he top it. Ozzy was alert, excited, enthused and ready to take on all comers.

Slash got back onstage, and the Prince of Darkness seemed right at home with a dual-guitar attack. Ozzy and Camp Freddy plowed through "I Don't Know," "S.O.S." and "Iron Man."

The take-away: Either the custom car world is mighty profitable or a whole lotta rock stars are eager to get their rides pimped.