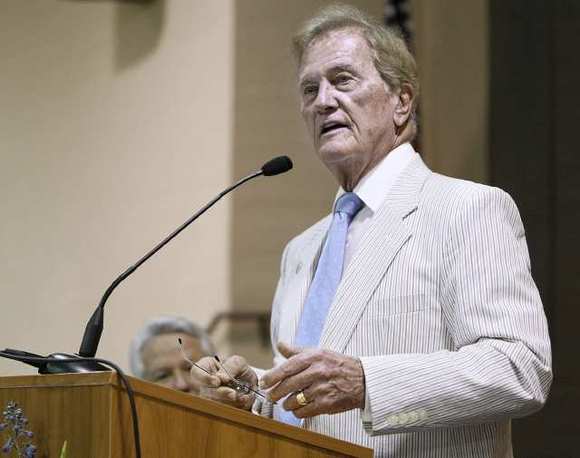 Sharing stories about how God has touched his life, famed entertainer Pat Boone called on attendees of the 50th annual Glendale Mayor’s Prayer Breakfast to let prayer into their lives, now more than ever in the wake of recent acts of mass violence.

“Our nation needs prayer, we always do, but we know it now more than ever,” Boone said as he spoke before more than 250 people at the Civic Auditorium.

Wearing a white suit with brown and blue stripes and a pin featuring both American and Israeli flags, Boone went on to describe prayer as a supernatural conversation between people and God, and gave examples of how it has helped him and others in his life.

He recalled a harrowing 40-foot fall his grandson, Ryan Corbin, took about 12 years ago through the roof of a Los Angeles apartment building, landing on a concrete floor. Boone and his family prayed that Corbin would survive, although doctors told them it was unlikely.

But Corbin did survive. He spent seven months in a coma and when he awoke, it was hard for him to focus.

“It was like he was looking for fish in a tank,” Boone said, adding that at 36, his grandson is still recuperating.

“That he will live and not die, that’s what we clung to,” said Boone, who after a long singing, acting and producing career wrote several religious books.

Boone, who’s also national spokesman for the 60 Plus Assn., hasn’t just prayed for his family, he’s also prayed for those who don’t believe in God.