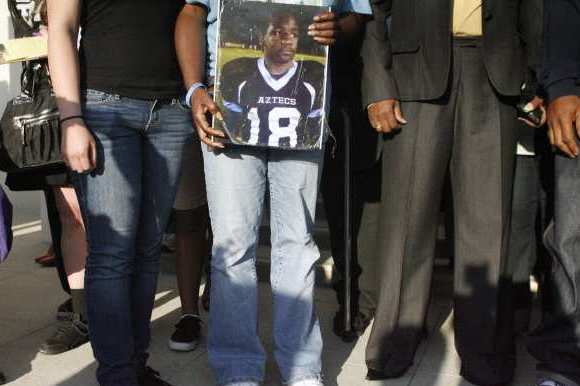 The two Pasadena police officers who fatally shot unarmed Azusa college student Kendrec McDade during a robbery investigation one year ago acted “within departmental policy,” an internal review of the incident has determined.

Findings of the Pasadena police administrative review board were announced in a brief statement Wednesday.

Newlen and Griffin were responding to an 11:04 p.m. report that two men were fleeing the scene of an armed robbery on Orange Grove when they spotted McDade running near Orange Grove and Fair Oaks Avenue, according to findings of the district attorney’s office probe.

Oscar Carrillo, who told 911 dispatchers eight times that the assailants had threatened him with guns, later admitted to lying about the weapons in order to generate a faster police response.

McDade was clutching at his waistband during the chase and after he turned and charged toward Newlen and Griffin, the officers told district attorney’s office investigators.

McDade was later found to be carrying a cellphone in the front of his sweatpants, according to investigators.

Further details about the probe’s findings are not being made public because investigation documents are part of the officers’ personnel records, Pasadena Police Lt. Tracey Ibarra said.

In December, an investigation by the Los Angeles County district attorney’s Justice System Integrity Division concluded that the officers had “a reasonable fear of imminent death or serious bodily injury” and “acted in lawful self-defense and defense of others” in shooting McDade.

Investigations by the Los Angeles County Office of Independent Review and the FBI remain ongoing, according to police.

Photo: Anya Slaughter, center, holds a picture of her son, Kendrec McDade, during a rally in front of City Hall in Pasadena last year. Credit: Cheryl A. Guerrero