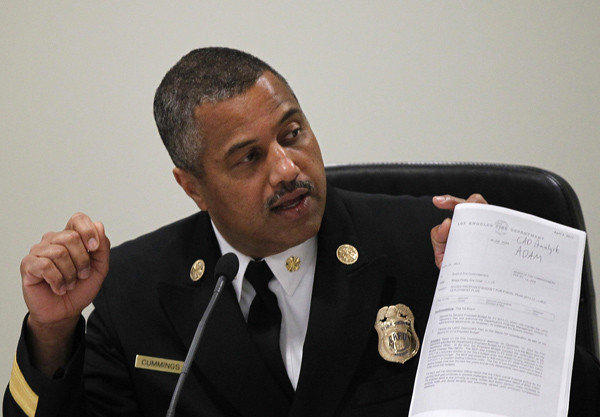 A Times analysis of city and county records published in October found that in more than 70,000 emergency medical calls since 2007, the LAFD sent its own rescuers to victims despite the fact that Los Angeles County firehouses were closer to the scene.

More than 1,300 of those cases involved cardiac arrests, in which seconds can mean the difference between life and death. In two cases highlighted by The Times, cardiac arrest victims died after waiting for LAFD units when county help was closer.

In an interview with The Times editorial board, Cummings said he would like to see a seamless network that connects dispatch systems across municipal borders. The LAFD is in the early stages of developing a new computer system designed to work with neighboring dispatch centers, although other agencies will have to pay for similar upgrades to make the plan work.

"A system like that would provide the highest level of coverage," he said.

The LAFD’s existing dispatch database is decades old and routinely breaks down, according to interviews with fire officials and internal LAFD documents previously reported by The Times.

Cummings said the upgrade would take three to five years and cost $12 million to $14 million for each department that connects.

For years, fire agencies across the country have pooled resources to alert rescue units closest to callers in need of help. Some of the largest fire departments in California, including those serving Orange County, San Jose and San Diego, have linked their dispatch operations.

Los Angeles' city and county fire agencies agreed in 1979 to link their dispatching operations to save lives and cut costs. But the connection was never made.

When The Times first reported on long delays in LAFD response times near city borders, Cummings said he was unaware of the plans laid out by previous chiefs.

On Wednesday, he said he has since met with Los Angeles County Fire Chief Daryl Osby, but said the talks were inconclusive.

“The savings would be astronomical,” Hudley-Hayes said. “But there’s an upfront cost.”

Delayed 911 response a matter of geography and jurisdictions

The Times Investigation: Life on the line, 911 breakdowns at LAFD

Map: How fast is LAFD where you live?