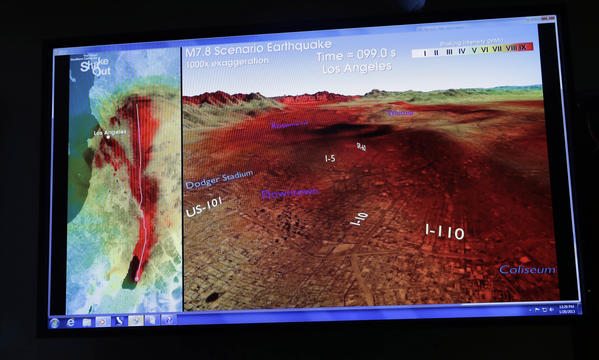 An earthquake early warning system being tested in California gave seismologists in Pasadena up to 30 seconds to prepare for Monday morning’s temblor in the desert of Riverside County.

“It was right,” said Kate Hutton, a seismologist with Caltech. “I sat really still to see if I could feel it and it worked.”

The Early Earthquake Warning project, a test run of a proposed statewide program that would use thousands of sensors already in place to notify people about imminent shaking from moderate to strong earthquakes, alerted Caltech scientists about a 4.7 temblor in Anza.

In the moments leading up to an earthquake, even a few seconds can make a difference, seismologists say.

An early warning would give utilities time to shut down, trains a chance to slow so they don’t derail and workers a chance to move away from hazardous materials or precarious positions.

The system that warned Hutton on Monday morning was part of a beta-test for an early warning program proposed by state Sen. Alex Padilla (D-Pacoima) earlier this year.

Researchers have relied on about $400,000 annually to develop technology for the system. A $6-million grant in 2011 from the Palo Alto-based Gordon and Betty Moore Foundation injected more life into the project, but experts estimate upgrading monitors and sensors across California – there are thousands of them – would cost up to $80 million.

Japan has had an early warning system in place since 2007. The program alerted some 50 million residents ahead of the Fukushima earthquake in 2011.

California’s program warns scientists in one of two ways: a single station near the epicenter alerts researchers to the first waves sent by an earthquake called P-waves; or by waiting for several sensors to pick up the vibrations.

The single-station method is faster but less reliable compared to the network method, which takes longer to alert seismologists but offers more accurate information, according to the California Integrated Seismic Network. It was not immediately clear which method alerted Caltech officials to Monday’s quake.

Earthquake tremors move through the Earth at the speed of sound, or about five miles a second. A warning system would do nothing for people within 20 miles of the epicenter, dubbed the “blind zone” because of their proximity to the initial shaking, but the farther out from epicenter you go, the more lead time there is.

Craigslist buyer leaves with car before paying for it

LAUSD to pay Miramonte victims $30 million; teacher due in court

Photo: A computer-generated graphic is displayed at a news conference in Pasadena earlier this year. Credit: Associated Press