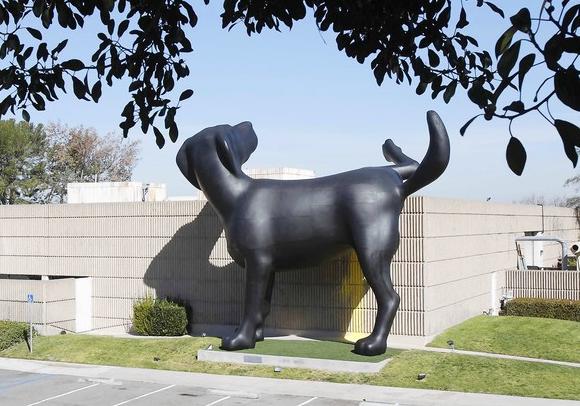 In the 1970s, Mad Magazine published a classic cartoon depicting an amusement park called Get-It-Out-Of-Your-System-Land, which offered a series of booths allowing visitors to unload their basest urges: defacing classic paintings, burning books, smashing rare violins and the like.

The park didn't include an opportunity to create a mess in a major art museum, but that's what the Orange County Museum of Art is basically offering as part of "Ain't Painting a Pain," its chaotic new show by Richard Jackson.

From now until March 10, the museum will accept reviews of Jackson's show, with the writer of the wittiest commentary getting to take part in a new piece later in the month.

The work, titled "Do It Yourself Painting (Still Life)," will be created by rigging a machine with electric fans and using it to splatter paint around part of the lobby. The contest's winner gets the honor of turning on the machine.

Does that qualify as creating or destroying? The two themes intertwine constantly in Jackson's work.

"It's a different way to extend painting to make it something different and kind of contemporary, where it's not this object that we have to take care of after it's over," he said. "It's about destruction. It's about throwing things away when you're finished. I see my things as evidence of an event. Most of the time, people aren't around when I execute these things."

Evidence plays a key role in many of Jackson's installations, as viewers are invited to survey the scene and determine how what ended up where.

To create one piece in his show, the artist filled a remote-controlled model airplane with paint and rammed it into a wall, leaving splashes of color and shards of machinery on the floor. Another, titled "Painting With Two Balls," was created by pouring paint over a pair of spinning spheres attached to the engine of a car; the result turned the surrounding floor and walls into a massive drip painting.

Oh, and then there's the peeing dog. Outside the museum, a massive fiber-and-steel canine sculpture lifts its leg above the wall, with a trickle of dried yellow paint indicating what it, well, got out of its system. It goes without saying that the 28-foot pooch is a favorite of children who visit the museum.

"That's a big part of what Richard does with his work," said museum Director Dennis Szakacs. "He takes the idea of painting, which is a rectangle confined by a frame, hanging on a wall, and he turns it into something that is room scale or that is sculptural, completely changing the nature of how you experience a painting and how a painting is made."

That Jackson uses scale as part of his art becomes increasingly apparent as one ventures through "Ain't Painting a Pain"; the show, according to its press kit, is the first ever by a living artist to occupy the museum's entire exhibition space.

Some of Jackson's installations take up entire rooms, and in some cases, the room itself becomes part of the art: One floor is made up of interlocking puzzle pieces, while a piece titled "1,000 Clocks" surrounds the viewer with simultaneously moving clocks, even on the ceiling.

The show marks the first career retrospective for Jackson, who was born in Sacramento and launched his art career in Los Angeles in the late 1960s. After it closes in Newport Beach, it will move on to venues in Germany and Belgium.

The ideas will pass on, anyway. Some of Jackson's pieces, like the clocks, can be packaged and set up elsewhere; in other cases, the works will give way to the broom and mop when the exhibit ends, and the machines will have to re-splatter paint at the next stop. But even if many of Jackson's current works die with the end of the Newport Beach show, he's fine with that.