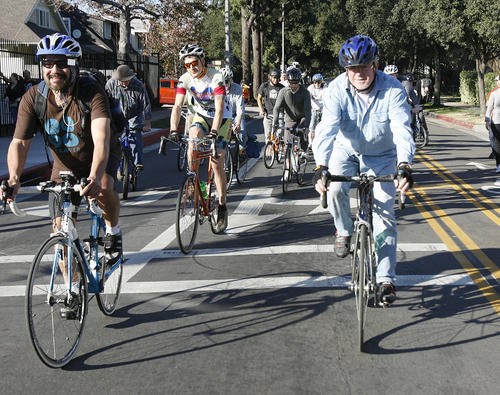 Pasadena's first "bicycle boulevard" was unveiled this week as part of the city's plan for traffic management and safer cyclist conditions along Marengo Avenue.

A ribbon-cutting ceremony and inaugural ride marked an “important event in the bicycle life of Pasadena,” said Mayor Bill Bogaard at the Thursday event. “There's a lot to be seen in the city of Pasadena on foot and on a bike, and as we are reminded today, there are great benefits to slowing down and enjoying the journey.”

The bicycle boulevard, which is the second in L.A. County, stretches about three-quarters of a mile along Marengo Avenue, from Orange Grove Boulevard to Washington Boulevard.

Marengo has very little traffic volume, so it provides “a safe and attractive place for people to ride their bikes,” said Mark Yamarone, the city's principal transportation planner.

The project was funded through a $500,000 Bicycle Transportation Grant from the California Department of Transportation. It is one of hopefully many new bicycle-friendly additions to the community, officials said.

According to the Pasadena city website: "Although this stretch of Marengo is not open to through vehicular traffic, Marengo Avenue’s residents with cars can still enter the new bicycle zone by using side streets.  Local drivers will be able to exit their cars at the Orange Grove and Washington intersections as 'Bicycle Boulevard' is still considered a regular residential street with on-street parking for cars and vehicular use. "