Man held in theft of $864 in meat, detergent from Vons 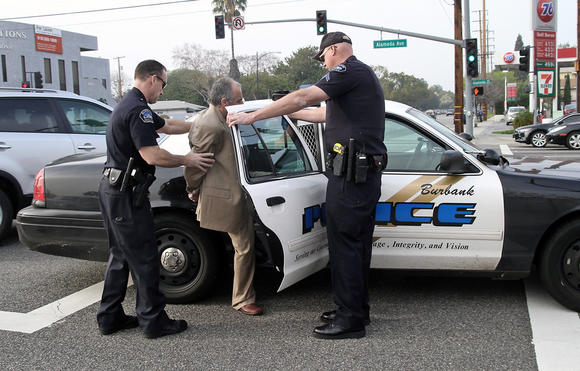 A 44-year-old man was hospitalized for chest pains Tuesday after he allegedly tried to flee a Burbank Vons with $864 worth of meat and cleaning supplies stuffed in a shopping cart, police said.

Artur Khalatyan of Glendale entered Vons on Pass Avenue at 2:30 p.m. and allegedly tried to make off without paying after filling his shopping cart with 21 packages of “expensive cuts” of meat and 11 bottles of cleaning detergent, Burbank Police Lt. Eddie Ruiz said.

But a store employee who recognized Khalatyan from a similar stunt he allegedly tried to pull off days before had already alerted loss prevention officers, Ruiz said.

When Khalatyan – who was wearing a beige suit and button-down shirt – allegedly walked past cashiers and out of the store without paying for the merchandise, loss prevention officers tried to detain him.

Khalatyan punched an officer in the face and ran, according to police reports.

A motorist in the parking lot followed Khalatyan – at a distance – while calling police.

Burbank police officers nabbed Khalatyan roughly a half mile away on Alameda Avenue near the 134 Freeway, where he complained of chest pains and difficulty breathing, Ruiz said.

He was transported to a local hospital, where he was held for observation.

Khalatyan was arrested on suspicion of robbery and is due in court later this month.

Photo: Artur Khalatyan, 44, of Glendale is arrested Tuesday in Burbank after allegedly trying to steal hundreds of dollars worth of meat and cleaning supplies from a Vons. Credit: Ross A. Benson / Times Community News