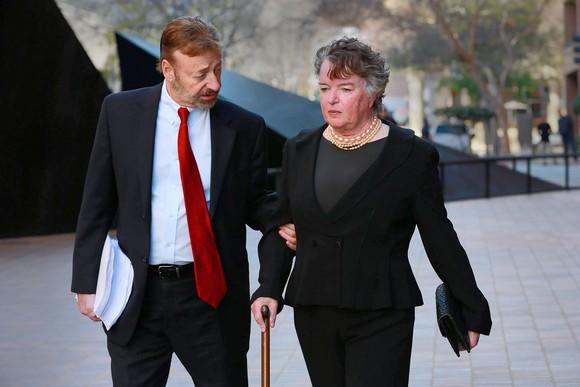 Maureen O'Connor was the first female mayor of San Diego. But when she left public life, she spent countless hours seated in front of video-poker machines, authorities said.

Over a nine-year period, she wagered an estimated $1 billion, including millions from a charity set up by her late husband, who founded Jack in the Box.

That was the portrait that emerged in court Thursday as the frail former mayor tearfully acknowledged she skimmed more than $2 million from a charity founded by her late husband, Robert O. Peterson.

O'Connor, 66, admitted in a plea deal that she had a gambling addiction and is nearly destitute. Her lawyer, prominent defense attorney Eugene Iredale, suggested that a brain tumor may have impaired her reasoning; he gave reporters copies of her brain scan from a 2011 surgery.

O'Connor's rapidly declining medical condition "renders it highly improbable — if not impossible — that she could be brought to trial," according to court documents filed by federal prosecutors.

"This is a sad day for the city of San Diego," said Assistant U.S. Atty. Phillip Halpern. "Maureen O'Connor was born and raised in this town. She rose from humble origins.... She dedicated much of her life, personal and professional, to improving this city."

The $1-billion gambling binge stretched from 2000 to 2009, according to court documents. In 2008 and 2009, when the fortune she had inherited was not enough, she began taking from the R.P. Foundation to cover her losses.

Despite being ahead more than $1 billion at one point, O'Connor "suffered even larger gambling losses," according to prosecutors. Her net loss, Iredale said, was about $13 million.

She was considered such a high roller that Las Vegas casinos would send a private jet to pick her up in San Diego. Records show that O'Connor won $100,000 at the Barona casino in San Diego County, while at roughly the same time she needed to cash a $100,000 check at the Bellagio in Las Vegas.

Those who knew the former political doyenne said she had become a recluse, inscrutable even to those she counted as friends.

"I considered myself one of her closest friends, but I would call her and she wouldn't return my call," said lawyer Louis Wolfsheimer. "I didn't want anything from her, just to know how she was. But it looked like she was becoming reclusive."

In a bargain with prosecutors, O'Connor agreed to repay $2,088,000 to the R.P. Foundation started by Peterson, which supported charities such as City of Hope, San Diego Hospice, and the Alzheimer's Assn., and was driven into insolvency in 2009 by O'Connor's misappropriation of funds, prosecutors said.

"I never meant to hurt the city," an emotional O'Connor told reporters gathered at a restaurant close to the federal courthouse. She promised to repay the foundation but declined to answer questions.

Prosecutors agreed to defer prosecution for two years. If O'Connor violates no further laws and makes restitution, the charge of making illegal financial transactions may be dismissed. Under the agreement, O'Connor acknowledged her guilt but was allowed to plead not guilty.

As part of her plea agreement, O'Connor agreed to settle "all tax liability resulting from her receipt" of money from the foundation. She also agreed to seek treatment for her gambling addiction.

Although she is currently without income or a bank account, O'Connor's economic status could reverse if she wins a civil lawsuit filed against a German bank involved in the 2005 purchase of a resort in Mendocino County that O'Connor had purchased in 1998.

O'Connor sold the Heritage House for $19.5 million but has alleged that she was the victim of fraud in the sale. A settlement or victory at trial could provide the millions needed to pay restitution to the foundation and also the tax liabilities involved with the misallocation of its funds.

"No figure, regardless of how much good they've done or how much they've given to charity, can escape criminal liability with impunity," said U.S. Atty. Laura Duffy.

One of O'Connor's major worries, defense attorney Iredale said, "is fear of losing her reputation."