Dorner manhunt: Reward will be offered for ex-cop's capture 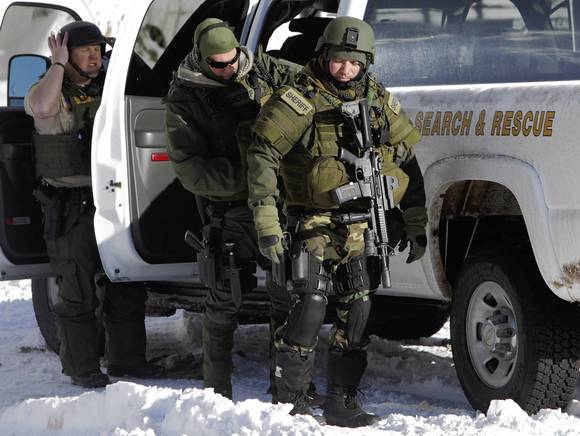 Authorities on Sunday will offer a reward for information leading to the capture of a former Los Angeles Police Department officer wanted in the killings of three people and the wounding of two others.

According to a statement, the news conference will be attended by law enforcement officials from Los Angeles, Riverside and Irvine. Officials from the FBI and U.S. marshal's office also will be there.

Los Angeles Police Chief Charlie Beck announced he was reopening the investigation into the firing of  Dorner from the Police Department, the event that apparently sparked his vengeful campaign.

Beck said he was reopening the investigation "not to appease a murderer" but to assure the public his department is fair and transparent. He said he wanted to protect an "increasingly positive relationship with the community" that the LAPD has developed over the last few years.

"I am aware of the ghosts of the LAPD's past and one of my biggest concerns is that they will be resurrected by Dorner's allegations of racism within the department," Beck said in a prepared statement. "...Therefore, I feel we need to also publicly address Dorner's allegations regarding his termination of employment."

Dorner was stripped of his badge in 2009 after a police disciplinary board found him guilty of making false statements against his training officer, Teresa Evans. In August 2007, Dorner accused Evans of kicking a mentally ill man during an arrest in San Pedro.

The internal affairs investigation concluded Evans had not kicked the man and Dorner was lying.

Police said Dorner has killed three people, including a Riverside police officer, and injured two others over the last week in a campaign to take revenge on those he blamed for his dismissal from the LAPD.

At a news conference Saturday, LAPD Cmdr. Andrew Smith announced a special joint task force was being formed to investigate the Dorner case. Participating agencies include the Irvine and Riverside police departments, the FBI, the U.S. marshal's office and other law enforcement organizations.

Dorner remained a fugitive Saturday despite an interstate manhunt that included SWAT teams, armored-personnel carriers and helicopters with heat-detecting cameras.

In their third day of searching for the 33-year-old Navy veteran, authorities kept their focus on the mountains around Big Bear Lake in San Bernardino County.

Dorner's burned-out pickup truck was discovered Thursday morning on a dirt forest service road in the area. The truck's axle was damaged and investigators discovered torched weapons inside the vehicle, law enforcement sources said. Sheriff's SWAT units began scouring the forest for Dorner within hours, but their efforts were slowed by heavy snowfall.

On Saturday, agencies from throughout the region collaborated on an aerial search using two helicopters equipped with infrared cameras that detect heat.

"We can see any person or a rabbit," said helicopter pilot Bill Fitzgerald of the Orange County Sheriff's Department. "The only thing that's harder about it here is that the person could be bundled up, so you maybe only get their head or hands."

With the novelty of the manhunt wearing thin and fresh powder thick on the slopes, tourists descended on the resort area Saturday. Visitors enjoying blue skies and 18 inches of fresh snow said they doubted Dorner was near.

"It would be dumb for him to be up here with his torched vehicle," said Kristy Deas, who was visiting with her husband and three children from Edwards Air Force Base. "He's probably somewhere else."

Years of court filings and Internet posts have shed some light on the fugitive's mysterious personality. Dorner was described as a bully and depicted as a man who appeared obsessed with preserving his good name.

He had a history of making complaints against fellow LAPD officers as well as an ex-girlfriend.

When a Los Angeles police disciplinary board found Dorner guilty of making false statements against Evans, he could not hide his dismay. "I told the truth!" Dorner blurted out in the hearing room. "How can this happen?"

Dorner's stunned reaction was detailed in transcripts of the hearing filed in appeals court. "The board has determined that Officer Dorner's credibility is damaged beyond repair," the board chairman said.

Dorner also was accused of punching a recruit, Abraham Schefres, in the chest while both were in the Police Academy in 2006, records show. Schefres was wearing a bulletproof vest and a trauma plate when Dorner allegedly punched him.

Schefres did not believe the punch warranted a complaint at the time and later told an investigator he "believed this was part of Dorner's persona," records show. He described Dorner as a "hothead" who would walk up to fellow recruits and "get in their faces in an aggressive" but joking way.

Dorner said he "tapped" Schefres on the chest because he was wearing an expensive trauma plate, according to the transcripts.

Schefres was interviewed about the punch during an investigation into allegations that Dorner slapped the hand of another recruit, records show. Dorner had accused a second recruit — as well as another recruit — of using a racial slur while they were traveling in a police vehicle during their time in the academy.

The department confirmed Dorner's slur allegation against one of the recruits but not the other, records show. The agency concluded Dorner's punch of Schefres did not rise to the level of misconduct.

By then, Dorner was serving a military deployment overseas for the Navy. He returned to the LAPD in the summer of 2007, and in August made the accusation against Evans.

In a Facebook post that authorities have described as his manifesto, Dorner allegedly said he had "exhausted all available means at obtaining my name back. In essence, I've lost everything because the LAPD took my name and (knew) I was INNOCENT!!!"

Dorner spent years unsuccessfully appealing his termination. The Facebook post complained about Randal K. Quan, saying he did not fairly represent Dorner at the LAPD hearing. "Suppressing the truth will lead to deadly consequences for you and your family," the manifesto said.