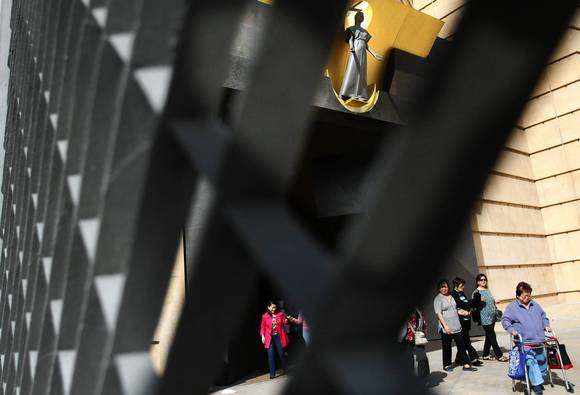 The former clergyman, Joseph Pina, did not work with children in his school district job, said L.A. schools Supt. John Deasy. He added that, as a result of the disclosures, Pina would no longer be employed by the nation’s second-largest school system.

Over the weekend, Deasy was unable to pull together Pina's full employment history, but said the district already was looking into the matter of Pina’s hiring.

“I find it troubling,” he said of the disclosures about Pina. “And I also want to understand what knowledge that we had of any background problems when hiring him, and I don’t yet know that.”

L.A. Unified itself has come under fire in the last year for its handling of employees accused of sexual misconduct.

Pina, 66, was laid off from his full-time district job last year, but returned to work episodically to organize events. He apparently helped to organize a ribbon-cutting Saturday for a new education facility. Pina did not attend the event, and the district could not confirm over the weekend whether he had been paid for any help he had provided.

Pina’s name emerged in documents released by the archdiocese to comply with a court order. Pina’s case was one of many in which church officials failed to take action to protect child victims and in which first consideration was given to helping the offending priests rather than their victims, according to the documentation.

A just-released, internal 1993 psychological evaluation states that Pina "remains a serious risk for acting out." It adds that, "over the years he has perfected his method, and his behavior suggests that single Hispanic female mothers and possibly minors are at risk for becoming victimized."

The evaluation also includes a recommendation, “to take appropriate measures and precautions to insure that he is not in a setting where he can victimize others." Pina continued to work as a pastor as late as March 1998.

School district officials could not verify Pina’s hire date over the weekend, but he took a job with L.A. Unified as the school system was carrying out the nation’s largest school construction program. His job involved community outreach, building support for school projects, while also collecting and trying to address community concerns, officials said. Such work was crucial to the program, because even though communities wanted new schools, their locations and other elements could prove controversial. Such projects frequently involved tearing down homes or businesses, environmental cleanups, and the blocking of streets and other disruptions.

“His duties were to rally community support and elicit community comments regarding schools in a neighborhood,” said district spokesman Tom Waldman.

Pina’s work did bring him into contact with families, frequently at public meetings organized to hear and address their concerns.

Projects that Pina worked on included a new elementary school in Porter Ranch and a high school serving the west San Fernando Valley, Waldman said. The high school, in particular, generated substantial public debate as a district team and a local charter school competed aggressively for control of the site.

The $19.5-billion building program is winding down, and, as a result, many jobs attached to it have come to an end. Pina’s was among them.

He apparently helped organize the dedication Saturday of the Richard N. Slawson Southeast Occupational Center in Bell. The adult education and career technical education facility has 29 classrooms as well as health-career labs and child care for students. The school opened in August 2012.

Pina “was slated for some additional temporary work when the issue came to our attention last week and that work was canceled,” Deasy said.

It may have been Pina who first alerted district officials that his name appeared in disclosed documents, Deasy said. Pina called a senior administrator in the facilities division. So far, no untoward issues have emerged regarding Pina’s work for L.A. Unified.

Steve Lopez: How can Cardinal Mahony still be a priest 'in good standing'?

Photo: Parishioners leave noon Mass at the Cathedral of Our Lady of the Angels on Friday, a day after Archbishop Jose Gomez released thousands of pages of personnel files about abusive priests. (Bob Chamberlin / Los Angeles Times)