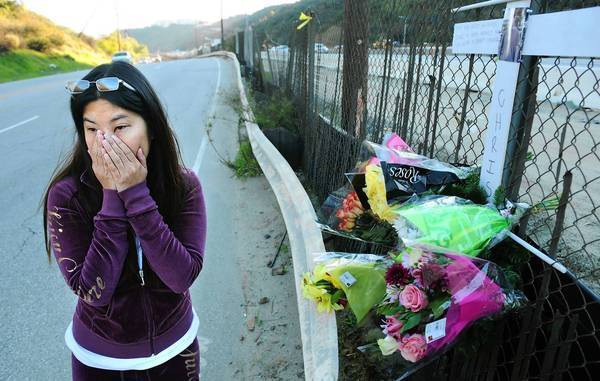 The death of a photographer who was hit by an SUV on Sepulveda Boulevard after taking photos of Justin Bieber's Ferrari has ignited a debate about whether more laws are needed to curb the excesses of the paparazzi.

“I can only hope that [the] events will bring better understanding to the various issues at play in the Wild West atmosphere that commonly manifests when paparazzi are in pursuit of a celebrity," said Sean Burke of the Paparazzi Reform Initiative.

On Wednesday, Bieber went on the offensive, calling on lawmakers to crack down.

"Hopefully, this tragedy will finally inspire meaningful legislation and whatever other necessary steps to protect the lives and safety of celebrities, police officers, innocent public bystanders and the photographers themselves," he said in a statement.

It remained unclear if any legislators would take up his call. But Bieber did get some support from another paparazzi target, singer Miley Cyrus.

She wrote on Twitter that she hoped the accident "brings on some changes in '13 Paparazzi are dangerous!"

Last year, a Los Angeles County Superior Court judge threw out charges related to a first-of-its-kind anti-paparazzi law in a case involving Bieber being chased on the 101 Freeway by photographer Paul Raef. Passed in 2010, the law created punishments for paparazzi who drove dangerously to obtain images.

But the judge said the law violated 1st Amendment protections by overreaching and potentially affecting such people as wedding photographers or photographers speeding to a location where a celebrity was present.

The L.A. city attorney's office is now appealing that decision.

"There are plenty of other laws on the books to deal with these issues. There is always a rush to create a new paparazzi law every time something happens," he said. "Any new law on the paparazzi is going to run smack into the 1st Amendment. Truth is, most conduct is covered by existing laws. A lot of this is done for publicity."

Coroner's officials have not identified the photographer because they have not reached the next of kin. However, his girlfriend, Frances Merto, and another photographer identified him as Chris Guerra.

The incident took place on Sepulveda Boulevard near Getty Center Drive shortly before 6 p.m. Tuesday. A friend of Bieber was driving the sports car when it was pulled over on the 405 Freeway by the California Highway Patrol. The photographer arrived near the scene on Sepulveda, left his car and crossed the street to take photos. Sources familiar with the investigation said the CHP told him to leave the area. As he was returning to his vehicle, he was hit by the SUV.

Law enforcement sources said Wednesday that it was unlikely charges would be filed against the driver of the SUV that hit the photographer.

Veteran paparazzo Frank Griffin took issue with the criticism being directed at the photographer as well as other paparazzi.

"What's the difference between our guy who got killed under those circumstances and the war photographer who steps on a land mine in Afghanistan and blows himself to pieces because he wanted the photograph on the other side of road?" said Griffin, who co-owns the photo agency Griffin-Bauer.

"The only difference is the subject matter. One is a celebrity and the other is a battle. Both young men have left behind mothers and fathers grieving and there's no greater sadness in this world than parents who have to bury their children."

Others, however, said the death focuses attention on the safety issues involving paparazzi

"The paparazzi are increasingly reckless and dangerous. The greater the demand, the greater the incentive to do whatever it takes to get the image," said Blair Berk, a Los Angeles attorney who has represented numerous celebrities. "The issue here isn't vanity and nuisance, it's safety."