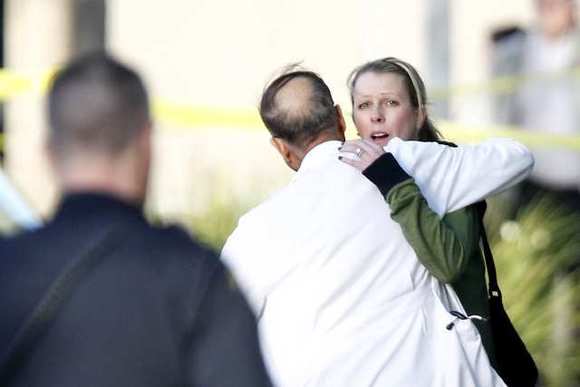 A doctor was shot and killed Monday in a building near Hoag Hospital in Newport Beach, police said.

Multiple people have identified the victim as a doctor at Orange Coast Urology, but police have not released the victim's name. An outgoing phone message at the urology office said the office had to close Monday because of an emergency.

Workers in the building said the shooting occurred in the doctor's exam room.

Newport Beach Police Department Deputy Chief David McGill confirmed to the Los Angeles Times that the slain man was a doctor but had no other details about him or the alleged gunman, who was taken into custody without incident at the scene, on the second floor of an office building at 520 Superior Ave.

"I sit right at the front desk; I would have caught the first bullet," said Becky Calderwood, who works two doors down from the office where the shooting occurred. "This is nuts; people are just shooting everyone all the time."

Calderwood said the gunman was a 70-year-old patient.

Shortly after the shooting, police led a handcuffed older man wearing a baseball cap out of the building.

Authorities received a call about 2:45 p.m. that six or seven shots had been fired, according to police spokeswoman Kathy Lowe.

A source with knowledge of the shooting said the building was a medical office affiliated with Hoag.

The suspect was taken into custody at 2:50 p.m., according to Lowe.

"We won't know a motive until our detectives have a chance to interview the suspect later tonight," Lowe said.

The shooting occurred in an office portion of the building, Lowe said.

Kristin Crotty works directly above the office. She said she heard gunshots but "blew it off as construction."

She said what she heard sounded like a nail gun and didn't know what was going on until she called building services and was told to lock her door.

About eight employees wearing white lab coats huddled outside late Monday afternoon, unable to enter the building, but the office was not entirely evacuated.

"I am terrified," Crotty said. "I just want to get home to my family right now."