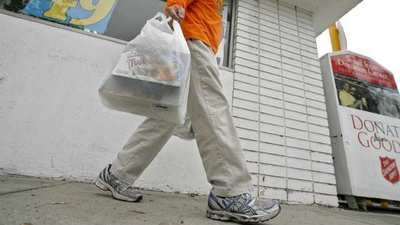 There was a sense of mourning Friday at the Wonder Hostess Bakery Thrift Shop in Glendale as both workers and customers came to terms with the end of the company and its famous snacks.

Glendale resident Charlie Ruiz, 63, walked out of the shop carrying a bag full of regular and chocolate-creme-filled Twinkies.

After hearing of the Hostess decision to close Friday amid continued financial trouble, Los Angeles couple Matt Cook, 26, and Jasmine Smith, 22, decided to make a trip to the factory storefront for a last-minute purchase of Wonder bread, cupcakes, Honey Buns and Chocodiles, a chocolate-covered sponge cake filled with creme.

"It reminds me of my childhood," said Cook, recalling how his mother bribed him with Chocodiles in exchange for good grades in school.

Twenty-five workers at the Hostess shop and distribution center on San Fernando Road and an additional 138 bakery workers in Atwater will lose their jobs. Others, including delivery drivers, will also be affected, though the total number has yet to be determined, said Hostess Brands spokeswoman Tammy Taylor.

"Everybody will eventually lose their jobs, some sooner than others," Taylor said, noting that a small group of employees are being kept on board to clean up and close the plant.

PHOTOS: No more Twinkies or Wonder Bread? Hostess going out of business

By 11 a.m. Friday, many of Hostess' most popular treats, including Twinkies and cupcakes, had been scooped off the shelves. Signs apologizing for the lack of supplies were posted inside the store.

The company is blaming its decision to shut down on a labor strike by members of the Bakery, Confectionary, Tobacco Workers and Grain Millers International Union. But Americans' appetite for junk food has also been waning in recent years. The company has filed for bankruptcy protection twice this decade, the last time in January.

The discount store outlet will be open for about a week to 10 days to sell off remaining product, Taylor said.

As for the commercial future of the location, Philip Lanzafame, Glendale's officer for economic development and asset management, said that while the layoffs and plant closure were surely significant for those involved, the building probably won't remain vacant for long.

"We have a very, very small vacancy rate in the [San Fernando Road] corridor. That property most likely will have a new user that will provide some sort of contribution to the local economy," Lanzafame said Friday. "I don't think it's a stranded property or it's a distressed property that's going to sit fallow for years and years."