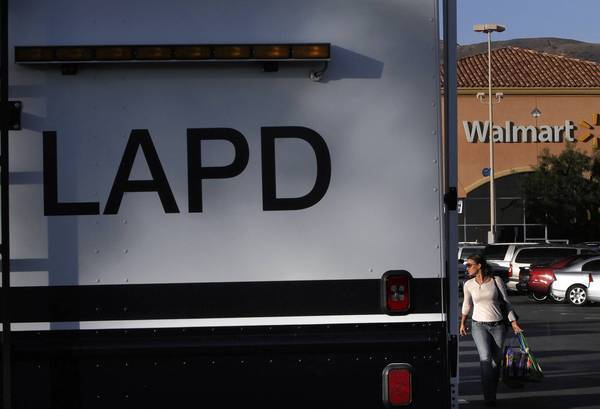 The Los Angeles Police Department is planning to be out in force to prevent Black Friday problems.

Helicopters will buzz above some shopping centers, and below, a cavalry of LAPD officers will patrol on bikes and horses. From store rooftops, officers will scan the crowds below looking for unruly behavior. Electronic signs near stores will warn customers about becoming victims of theft as they navigate the mass of humanity looking for bargains.

The deployments are part of a new strategy by the LAPD to deal with the retail roller derby that comes after Thanksgiving. In addition to stationing officers around shopping centers, the LAPD has been visiting stores across the city this week, talking to managers about the psychology of the frantic shopper.

Officials said the push was prompted by a series of incidents at Black Friday sales, notably one last year at a Porter Ranch Wal-Mart in which two dozen people were injured when a woman unleashed pepper spray during a frantic battle for some discounted video games.

LAPD Cmdr. Andy Smith said he hopes people will behave. But "like Chief [Charlie] Beck says, we are not in the optimism business."

The LAPD would not say exactly how many officers it will deploy Friday, but the number is expected to be considerable. In the Valley divisions, for example, officials have put together detailed tactical plans for each major shopping center, using mobile command posts and both officers and cadets.

"For some people, shopping is a competitive sport," Smith said. "But it should not be a contact sport."

Even some big retailers — which for years fueled the shopping frenzy with aggressive marketing and deep discounts — are trying to rein in some of the excitement they create this year.

Fernando Reyes, manager of the Wal-Mart in Porter Ranch where the pepper-spray incident occurred, said his main goal is to avoid a repeat of the chaos. He has met with the LAPD and plans new crowd-control strategies, including setting up special check-out lines for some sales items.

The store also plans to give out vouchers to shoppers for "door buster" merchandise to avoid people jockeying for the limited supplies. If a customer did not get such a voucher, Reyes said, there should be a "reasonable expectation" that they won't get the sales item.

The LAPD has talked to other retailers about creating "time-specific entry passes" that would stagger the number of shoppers who are inside the store at any given time. In a flier the department is handing out to store managers, officials note that "this process has been very successful at many of the major theme parks and can help to ensure organized, safe entry into your business."