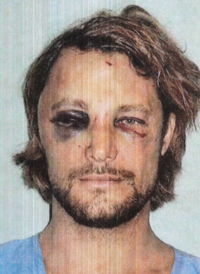 Halle Berry and her ex-boyfriend called a truce to their weeklong battle that began during a Thanksgiving fight at the actress' home.

Berry and Gabriel Aubry said in a joint statement that they've "reached amicable agreement" to their various legal battles but did not provide any details.

Aubry remains the subject of a criminal investigation after he and Berry's fiance got into a fight at Berry's home.

Aubry claims he suffered a fractured rib, bruises to the face and cuts that required stitches during a fight at the actress' home on Thanksgiving Day.

In court papers, Gabriel Aubry described the incident in detail.

Aubry is scheduled to appear in court Dec. 13 after a Thanksgiving Day altercation with French actor Olivier Martinez.

Aubry, who has a daughter with the Academy Award-winning actress, was arrested on suspicion of misdemeanor battery after police responded to a call that he had gotten into a fistfight with Martinez.

Aubry alleges in court papers that the hostilities between him and Martinez escalated when he attended a Thanksgiving lunch at his daughter Nahla’s preschool.

During the lunch, an “angry and agitated” Martinez approached him and threatened to beat him, telling him, “You’re lucky we’re in school right now,” the declaration alleges. Berry, accompanied by Martinez, took Nahla outside and ordered Aubry not to follow them. Eventually Berry and Martinez returned with Nahla and then left.

The next day, Aubry said, he brought his daughter to Berry’s home. When he pulled up to the front door of the actress’ residence, Martinez was waiting outside. After Berry’s housekeeper retrieved the girl, Aubry alleges, Martinez asked to talk to him, then attacked him.

“He continued to punch me at least two or three times, kicked me in the ribs … and took my head in his hands and slammed it to the concrete driveway,” Aubry said. “It all happened so fast so suddenly; I did not see Mr. Martinez’s actions coming, and thus, I was not ready for it and was not able to defend myself.”

Photo: Gene Aubry was arrested after a Thanksgiving confrontation at Halle Berry's house with the actress’ fiance, Olivier Martinez. Aubry claims Martinez threatened to kill him during a confrontation that left him with a broken rib and bruised face. Credit: Los Angeles County Superior Court