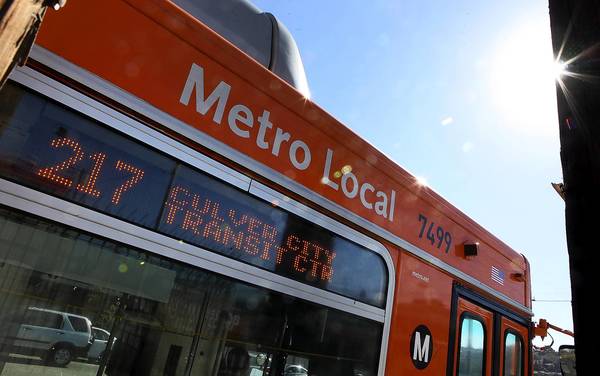 Authorities believe the suspect in the rape of a developmentally disabled woman was riding the buses looking for potential victims.

The woman, 18, was raped for 10 minutes on the 217 Metro Bus. She was going home from school when the incident occurred Wednesday afternoon.

Authorities said Trotter, 20, is a parolee and a transient who had previously been investigated on suspicion of sexual assault.

"It was a crime of opportunity," said sheriff's Sgt. Dan Scott. "Unfortunately, [the victim] was in the wrong place at the wrong time. He followed her onto the bus and assaulted her."

In this week's incident, both the suspect and the victim got onto the bus about 5 p.m. at the corner of La Cienega and Jefferson boulevards, near the new Expo Line rail station.

Sheriff's officials said they doubt the bus driver or the passengers on the bus knew what was happening.

"He immediately went to her and began the assault," Scott said. "…The suspect had his back to the front of the bus. People generally think of a rape as some kind of attack where someone's thrown down. Its not always the case."

"The victim did not scream," he added. "The victim told our detective that she was shocked, and didn't know what to do, and was in fear of her safety and her life."

Detectives are seeking riders on the bus, including one passenger they believe may have witnessed the incident, though they can't be sure. He "did not jump up and scream rape or that someone was being assaulted," Scott said.

Trotter has a history of run-ins with the law, according to records. Last year, he was convicted of drug possession. In April, he was convicted of grand theft and sentenced to a year in jail, but did not serve his full sentence. In June he was arrested again, and in September admitted to violating probation. He was released from jail Sept. 28. On Oct. 15 he was arrested again by Redondo Beach police and served 10 days in jail. Records did not include specifics on that offense.

Authorities said Trotter had been investigated on sexual assault allegations before but never charged.

This summer, the Los Angeles County Sheriff's Department created a team of nine deputies who swarm transit lines where crime has risen. Most of the crimes they've cited were misdemeanors or low-level infractions such as not paying the fare.

Authorities said their greatest asset for stopping rare, serious crimes such as Wednesday's are other commuters.

Sheriff's officials were skeptical that anyone on the bus Wednesday noticed the attack and failed to act, but Sheriff's Capt. Holly Perez acknowledged that sometimes witnesses are afraid to interfere.

"I think that's human nature," she said. Bus drivers are required to dispatch deputies — or flip a silent alarm — if an incident occurs on board. Perez said many drivers take ownership of their routes, stubbornly guarding their bus passengers.

But in a brief interview Friday, one bus driver in Culver City said it can be difficult to monitor passengers while keeping an eye on the road.