Thousands of Muslims gather in prayer at Angel Stadium 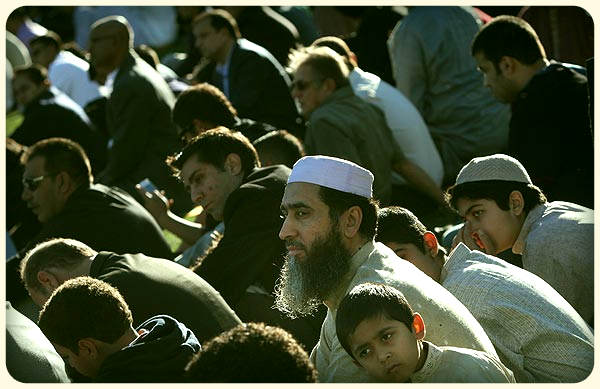 As the sun burned in the soft blue sky, thousands of Muslims poured into Angel Stadium early Friday and filled the morning with the sounds of prayer as they celebrated Eid al-Adha, or the Feast of the Sacrifice, the most important holiday of the Islamic calendar.

"Eid Mubarak," men and women said in greeting, wishing blessings for the day. Youngsters skipped school, elders from across Southern California glowed with the spirit of the season - in culmination of the annual pilgrimage, called Hajj, a tribute to Prophet Abraham's life and legacy.

FROM THE ARCHIVES: A first-person account of the pilgrimage to Mecca

"It brings a different flavor when you're outdoors in the cool breeze and bright sunshine," said Shakeel Syed, who heads the Islamic Shura Council.

"In past years," he said, "people went to individual mosques, but this year -- luckily or unluckily -- the Angels are not in the playoffs, so the stadium was available."

Rather than sit in the stands or the bleachers, worshippers walked on the stadium grass, fanning across the baseball diamond.

"The excitement of being in a place that's generally not accessible to most of us is amazing," Syed added. "Here, you're able to see the entire crowd, unlike at a mosque. It lifts up the spirit."

The words "Eid Ul-Adha" glowed in neon under the Toyota and Metro PCS logos on the Jumbotron screen. It rotated with other Arabic terms, ads touting Quran and Saturday school, and a flashing "Vote on 11/6." Melodic chants rang in the air.

"I felt a sense of unity. I couldn't believe there was that many people," said Tarek Soubra, a junior at Pacifica High School in Garden Grove. He missed calculus class, along with Spanish 3 to attend the service, which included a 15-minute sermon.

His father, Samer Soubra, president of Islamic Institute of Orange County, described the experience as "more than what we expected. Not just attendance - but everyone was happy to see all three mosques together, and this way, they could visit with their friends who live in different areas and celebrate with one another."

"People want to have this every year now," he added. "Nature was very beautiful."

Participants said they couldn’t wait to return. "I envision a time when we have 50,000 people--and we can," Syed noted. "The only challenge is there isn't a place that can host 50,000 people, with parking, and do it seamlessly."

So for next year's prayer sessions, "maybe we'll have three rounds."

Photos: Top: Zubair Usman, 7, rests his head on his father Ibrahim Usman' shoulder as they  listened to the sermon during prayer at Angels Stadium. Bottom: An estimated 20,000 gathered at Angel Stadium for the historic event organized by leaders of three mosques - the Islamic Center of Irvine, the Islamic Institute of Orange County in Anaheim and the Islamic Society of Orange County in Garden Grove. Credit: Bob Chamberlin / Los Angeles Times