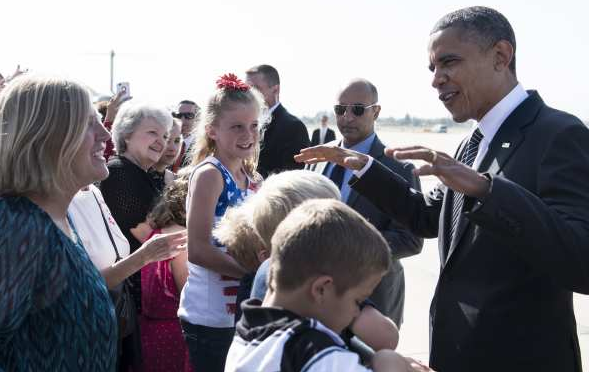 The struggling United Farm Workers union usually has a tough time attracting a crowd at its Kern County events.

But on Monday morning, it had its hands full with more than 7,000 people who had traveled long distances to witness President Obama’s dedication of the three-acre Cesar E. Chavez National Monument in the Tehachapi Mountains between Bakersfield and the Mojave Desert where Chavez was buried.

Only a week ago, National Park Service officials figured about 4,000 people would show up for the dedication of the first national monument to honor a contemporary Mexican American.

As of Monday, about 1,000 people who registered for invitations saw them rescinded by the UFW and Chavez foundation.

Among those turned down was Maricela Mares-Alatorre, a community activist from Kettleman City, an impoverished farming community north of Bakersfield.

“We were uninvited Sunday night,” said Mares-Alatorre, who had planned to accompany 13 other Kettleman City residents including her father, a farm worker who marched in Chavez’s funeral procession in 1993. “They said they were overbooked. We’re heartbroken.”

Marc Grossman, spokesman for the Cesar Chavez Foundation, which, along with the union, is headquartered at the site, said the crowd at the site was the biggest since Chavez died in 1993. “Clearly, we all underestimated the passion people have for Cesar, the farm workers union and the opportunity to see the president,” he said.

All those vehicles and more were parking wherever they could find space outside the monument site that  UFW members know as the Nuestra Reina de La Paz, a shady retreat that served as headquarters of the UFW and Chavez’s residence from 1971 to 1993.

Getting from parking sites to the monument itself was equally trying, given that it is at the end of a narrow winding lane off California 58.

President Obama was expected to lead the dedication ceremony at 11:15 a.m.

“These folks are making big sacrifices to witness history,” Grossman said. “They are having to brave long waits in line to get through the gates and be screened by the Secret Service.

“We announced the event on Wednesday evening and invited people to register online on our website,” he said. “The response was unanticipated and overwhelming. By Friday morning, we had to stop taking requests.”

Over the weekend, the UFW and Chavez foundation officials sent out emails to thousands of people hoping to dissuade them with reminders of the long distances and tedious waits that would be involved.

“Almost no one changed their minds about coming here,” Grossman said. “So we decided to confirm RSVPs based on a first-come, first-served basis.”

By Monday morning, roughly 1,000 invitations had been rescinded, Grossman said.

“Some folks were understandably upset,” he said.

Bicyclist thought to have gun dies in crash with patrol car