Endeavour: A family with ties to the shuttle is willing to wait for it 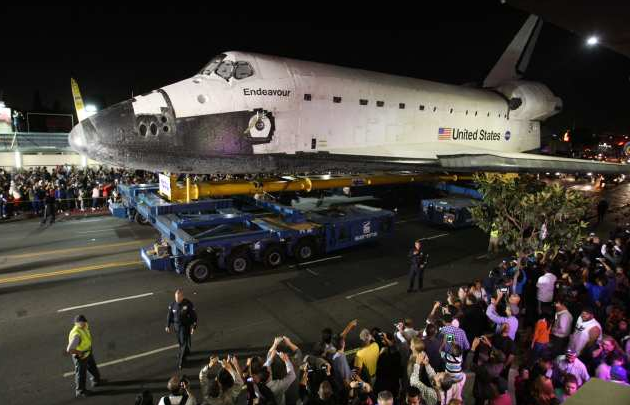 This post has been corrected. See the note below.

Years ago, Karrie Hinkle of Costa Mesa said, her parents watched Endeavour’s fiery trajectory from a Cape Canaveral launch pad not once, but twice.

A snail’s-pace crawl through the streets of Los Angeles hardly compares to the drama of a shuttle launch. But Hinkle still set up her lawn chair in a parking lot along Crenshaw Boulevard to watch Endeavour’s final journey.

“It’s happy and sad,” Hinkle said. “Sad the program is gone. But proud we have a shuttle here in L.A. It’s not something you ever get tired of seeing.”

Hinkle has worked for 20 years at Boeing, where she helps design insulation for space shuttles. That includes Endeavour. She’s currently designing “the next generation of space travel.”

Her parents, both of whom celebrated birthdays last week, flew in from Morton, Ill., to watch the shuttle.

“This is my birthday present,” her mother, Connie Young, said.

The crowd along Crenshaw had grown since early Saturday morning.  Endeavour's move was slowed for much of the day by extremely close trees, utility poles and buildings, and crews have been forced to complete tedious maneuvers to prevent the shuttle from being damaged.

PHOTOS: Endeavour rolls through the streets of L.A.

A dance party with choreographer Debbie Allen planned for the shuttle’s arrival began without the show’s honoree. Dancers began to leave. The marching band went home.

But Hinkle, her parents, her daughter and her daughter’s friend waited more than eight hours to see the shuttle inch into view over the heads of thousands of other spectators.

Young rose from her lawn chair and pressed her hands against the stone wall, craning her neck to see it. As it swept into view, the family said little, instead lining up against the wall for a series of photos with the shuttle in the background.

For the record, Oct. 13, 10:43 p.m.: A previous version of this post said Karrie Hinkle had watched the Endeavour launch twice, but it was her parents who witnessed the launches.

Why more people are going nuts for nuts