Sheriff Baca not out of touch on jail violence, spokesman says 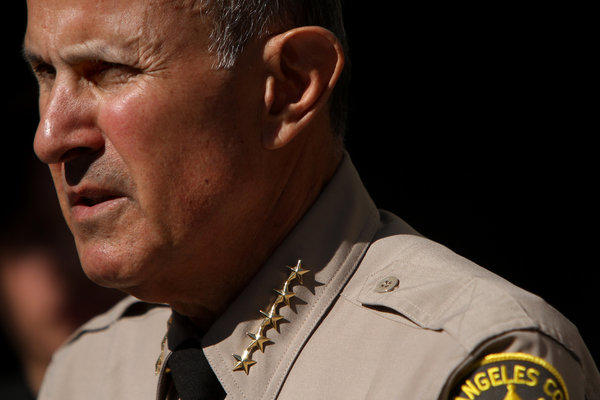 A spokesman for Sheriff Lee Baca rejected some of the criticism in a blue-ribbon commission report that accused Baca and others of fostering a culture in which deputies were permitted to beat and humiliate inmates and cover up misconduct.

The report was released Friday.

Baca was described as an out-of-touch boss who was "insulated … from force issues and other bad news" by his underlings. Members of his command staff, investigators said, tolerated a "code of silence" and failed to control and thoroughly investigate deputies' use of force against inmates.

Some department leaders "had a lax attitude toward deputy aggression and discouraged deputy discipline," the investigators said.

There was no evidence, investigators said, that Baca had tried to hold members of his senior management team accountable for their failures after he learned of the problems late last year, even though he has publicly faulted them for not alerting him to abuse in the jails. Baca's second-in-command, Undersheriff Paul Tanaka, came under harsh criticism from investigators for allegedly helping promote the corrosive culture that contributed to many of the jails' problems.

Sheriff's spokesman Steve Whitmore denied that Baca was out of touch, saying the sheriff responded aggressively last year when he first learned about the jail problems. "This is the man who responds immediately to things," Whitmore said. "He should have received more information than he did. But for a man that is out of touch, why didn't he just ignore it? Why did he respond? Because he is in touch."

Whitmore also defended Tanaka, saying the undersheriff did not foster a culture of violence but one of "creativity and accomplishment." Baca, he said, would wait to read the commission's final recommendations before deciding whether to implement them.

Though investigators said the majority of deputies were hard-working and ethical, they concluded that others preferred using force quickly during encounters with inmates, rather than as a last resort. Some deputies used strip searches to harass and humiliate inmates, they said. There was also evidence that deputies allowed inmates to attack one another and intentionally endangered high-security prisoners by putting them in the jails' general population and announcing their crimes to other inmates.

"These deputies are reflective of a disturbing mind-set that promotes a lack of respect for inmates … and a disdain for those supervisors who have endeavored to assert contrary principles," Douglas A. Axel, one of the investigators, told the commission.

The investigators, who are prominent attorneys volunteering their services, presented their findings at a public hearing of the Citizens' Commission on Jail Violence. Commissioners are expected to review those findings and publish a report with recommendations to improve the jails in three weeks. The panel was formed by the county Board of Supervisors in October after it was revealed that federal authorities were investigating allegations of deputies abusing inmates.

"These findings are both serious and troubling," said Commissioner Robert C. Bonner, a retired federal judge. Another commissioner described the conclusions as "blistering."

The FBI's secret investigation of the jails was revealed last year when The Times reported that the bureau had smuggled a cellphone through a corrupt jailer to an inmate working as a confidential federal informant inside Men's Central Jail. Since then, public scrutiny of the jails has intensified. Among the revelations was that top sheriff's officials had raised alarms in internal memos about jailers crafting narratives "dramatized to justify" force and supervisors allowing the behavior to go unchecked by conducting shoddy investigations. A retired jail commander told The Times that he had tried to take his warnings about gang-like deputy cliques to Baca but was ignored.

In recent months, the county commission has heard testimony from current and former sheriff's supervisors who have publicly alleged that top managers condoned a culture of abuse inside the jails. Many more sheriff's employees have spoken to the commission privately. In addition, investigators have reviewed thousands of documents and spoken to custody experts from around the country. The commission's investigators, however, have not presented much of the evidence behind their findings.

The investigators concluded that jailers used force against inmates more often, and more aggressively, than justified. Some inmates were the victims of force even when they were restrained or confined to a cell, the investigators said.

The recent drop in force incidents since the department came under scrutiny suggests that some of the force used in the past was unnecessary, said Maurice Suh, one of the investigators. Between January and September of last year, jailers were involved in an average of 53 force incidents per month. From October through June, that number had dropped to 38.

Suh also questioned how the department imposed discipline for using unreasonable force in less than 1% of force incidents from 2007 to 2011. "This figure either means that the department is basically perfect, which the evidence does not support, or that the discipline investigations system is broken," he told commissioners.

Investigators called for more in-depth training of jail deputies, additional supervisors to monitor jailers, and a change in attitude within the department toward the custody division, which is often viewed as a "second-class" section of the department. They suggested that the department would benefit from an oversight body that has similar powers and responsibilities as the inspector general who monitors the Los Angeles Police Department.

Investigators faulted Baca for allowing his undersheriff to run the jails without effective oversight. Tanaka, they said, "failed to uphold the department's goals and values," urging deputies to be aggressive and "work in the gray area," referring to police work that blurs the lines of legality. The undersheriff recently sent a department-wide email explaining that he had not meant to condone wrongdoing. Investigators said Tanaka also made comments undermining the credibility of internal affairs investigators and discouraged supervisors from investigating misconduct.

String of Southern California earthquakes no cause for alarm