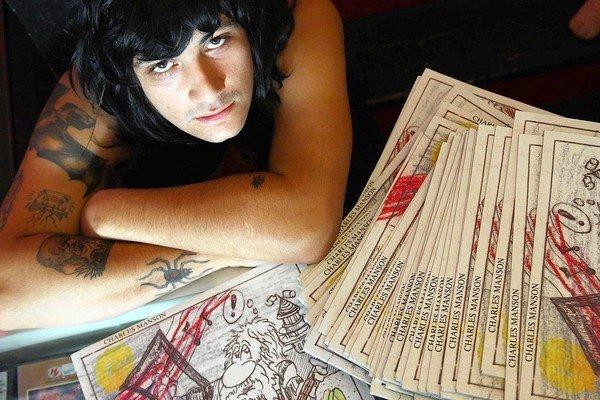 "I've gotten some hate mail from it. There are people not appreciating the release of music by him," said Manuel Vasquez, 26. "People say they don't understand why I'd want to associate myself with this or why I would be interested in releasing it."

Even his parents tried to talk him out of pressing and selling the 40-minute vinyl album.

"They're in their mid-50s and they grew up with a fear of Charles Manson," Vasquez acknowledged. "They don't want to have anything to do with him. They asked why I was doing it and did I know what I was getting into — did I fully understand the extent of what it means?"

Vasquez's album is hardly the first to feature Manson's music. Over the years about 20 vinyl or CD compilations have been produced. The songs on the new album have never been released, however, Vasquez said.

According to Vasquez, Manson's nasal, bluesy folk music-like sound won't appeal to everyone.

"I don't think there was ever a chance for mass popularity of his music," he said. "Most people won't like it. It probably requires an acquired taste."

But the album is selling well. "They're going so fast I may have to do a second pressing," Vasquez said.

Vasquez's Highland Avenue shop sits squarely in the middle of where Manson's rampage played out Aug. 9, 1969.

Manson, 77, was accused of being the mastermind behind the murders of pregnant actress Sharon Tate, three of her friends and a teenager in Benedict Canyon. The next night, Manson Family members killed Leno and Rosemary LaBianca in their Los Feliz home.

Manson and three members of his gang were convicted of the killings in 1971 and sentenced to death. That was reduced to life in prison the next year when the state Supreme Court abolished California's death penalty.

Vasquez said his interest in the case began when he was in junior high school and heard family members discuss it. He found himself wondering what Manson had done to become "branded the boogeyman of America," Vasquez said.

Vasquez researched the case on his own and decided he didn't believe the court's finding that Manson had issued the order to kill Tate, hairstylist Jay Sebring, screenwriter Wojciech Frykowski, coffee heiress Abigail Folger and 18-year-old Steven Parent, a friend of the caretaker of the estate who lived on the property.

Vasquez said he believed Manson's followers had acted on their own and has befriended Manson in prison, communicating with him mostly through the mail.

Photo: Manuel Vasquez with copies of albums containing the songs of Charles Manson. Vasquez has befriended Manson in prison and believes his followers carried out the killings of August 1969 on their own. Credit: Gary Friedman / Los Angeles Times