Glendale bear still in a cage; move to Colorado on hold 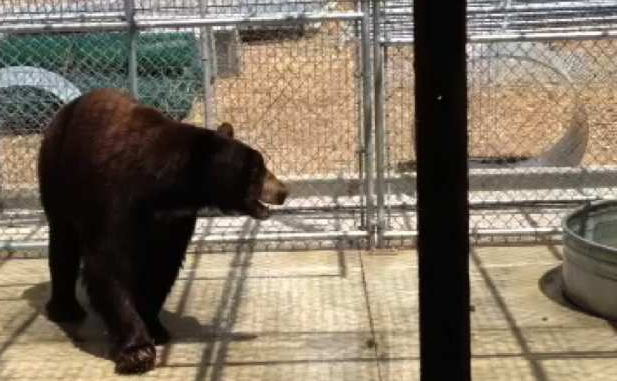 The fate of the Glendale bear remains in flux as officials from California and Colorado sort out the nuances of a wildlife law in the Rocky Mountain state that has put any move on hold.

The meatball-loving bear who frequented the Glendale and La Crescenta–Montrose areas and saw his popularity explode over the last five months was tranquilized and trapped last week, taken to a sanctuary in Alpine and transferred to a quarantine cage.

It was to be his temporary home, but on Wednesday that was where he remained.

The animal, affectionately known alternately as Meatball and Glen Bearian, was scheduled to be moved this week to a large sanctuary northeast of Denver that had accepted the transfer.

"The bear is not going to Colorado," Andrew Hughan, a spokesman for the California Department of Fish and Game, told The Times. "Facilities are no longer allowed to accept wild animals" under Colorado law, he said.

However, Pat Craig, executive director of the Wild Animal Sanctuary in Colorado, said officials were misinterpreting the statute. He said a 2006 Colorado Parks and Wildlife law says that no wild animals, such as the Glendale bear, will go to sanctuaries inside the state.

Craig, who was involved in the creation of that statute, said the meaning behind it was to prohibit wild animals from Colorado rehab facilities going to sanctuaries. An iconic bear like Glean Bearian is acceptable, he said.

"What typically happens is that six or eight years go by, some new guy comes in, and doesn’t know the interpretation of it," Craig said. "As far as I’m concerned, there's no problem whatsoever."

As evidence, Craig said that his facility has rescued "a number of bears" from California over the years, including two cubs from the state within the last three to four weeks. He said his team still plans to come get Meatball as soon as this week.

While officials work things out, the 400-pound black bear remains in a 15-by-20-foot cage at Lions, Tigers and Bears in Alpine on the edge of the Cleveland National Forest in San Diego County. Spokeswoman Jen Jenkins could not immediately be reached for comment, though Hughan said the sanctuary has "made every effort" to comply with laws and regulations.

Meatball-loving bear to be sent to Colorado sanctuary

Photo: Glen Bearian in his cage.  Credit: California Department of Fish and Game