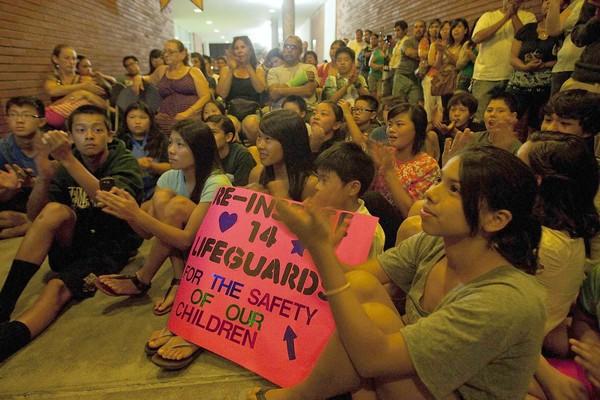 The El Monte lifeguards fired for riffing on a South Korean crossover pop phenomenon have drummed up nearly as much attention as the "Gangnam Style" video they spoofed.

The 14 part-time employees who lost their jobs have pulled in support from around the world. Thousands have "liked" their page on Facebook, with messages pouring in from Minnesota, Kentucky, Florida, Britain and Belgium. Psy, the male performer behind "Gangnam Style," questioned why city officials were inflexible.

And when the lifeguards and a manager went to a City Council meeting Tuesday to beg for their jobs back, hundreds crammed into the tiny chambers to back them up.

"At first, we were shocked at all the attention this was getting," said one of the lifeguards, Jacob Lopez, 19. "But the more supporters there were, the more it made me believe in what we were doing."

The video that got them fired was a much-watched spoof of the "Gangnam Style" music video, the global Internet sensation that has been watched more than 216 million times on YouTube and has spawned a small catalog of imitations and parodies.

"Lifeguard Style," as they titled it, has been viewed nearly 1.5 million times on YouTube. Supporters thought the goofy video brought good-natured attention to El Monte and offered a rare opportunity to market the city of 114,000 people.

City officials disagreed. Supervisors in the Parks and Recreation Division called the lifeguards — as well as a manager who did not appear in the video — into a meeting in which they were asked to review pages from a staff manual.

In a statement, officials said the lifeguards made an "unauthorized video" that used city resources without permission, namely distinctive red lifeguard swimwear and the city pool itself.

But the lifeguards have been fighting back and are making a case to the city to get their jobs back.

"There was no due process in terms of what happened to us," argued Michael Roa, 22, one of those fired and a University of La Verne student.

"Why was the punishment so severe?" asked Jesse Garcia, a longtime resident. "How does firing the lifeguards help the community, a community that watched its children grow up along with the lifeguards?"

Photo: The crowd at the El Monte City Council meeting overflows into the halls. The mayor says he will request an independent review of policies in the firing of the lifeguards. Credit: Allen J. Schaben / Los Angeles Times