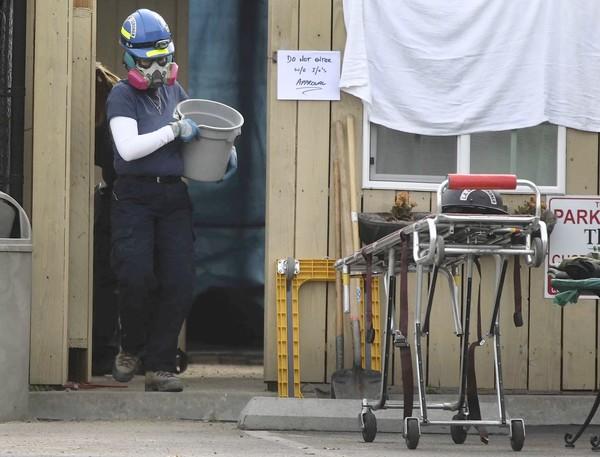 David Viens walked into his living room and panicked. He discovered that he had accidentally killed his wife, he said, and wanted to get rid of her body.

The chef said he thought of how easily he disposed of grease in his restaurant. So, he said, he stuffed his wife's body, face-down, into a drum of boiling water — and cooked it. For four days.

Viens has pleaded not guilty to killing his wife, Dawn, who was 39 when she vanished in October 2009. In 2011, after Viens learned investigators suspected that he had played a role in her disappearance, he leaped off an 80-foot cliff in Rancho Palos Verdes — feet first, arms raised, screaming.

On Tuesday, a jury heard two interviews that Viens, 49, gave to sheriff's investigators from his hospital bed. Though his attorney, Fred McCurry, has repeatedly said investigators had no physical evidence showing what happened to Dawn Viens, her husband gave a graphic explanation as to why.

David Viens said he packed his wife's 105-pound body into a heavy container and used weights to keep it submerged in the bubbling water.

"I just slowly cooked it, and I ended up cooking her for four days," he said.

"Before it was done," Viens said. It was unclear from the interview where the cooking took place.

Then, Viens said, he mixed what remained with other waste and poured it into the grease pit at his Lomita restaurant, Thyme Contemporary Cafe. Other remains were packed into garbage bags and chucked into a trash bin. All that remained was his wife's skull, he told investigators.

"That's the only thing I didn't want to get rid of in case I wanted to leave it somewhere," he said.

Garcia asked Viens where the skull was.

Later that day, investigators scoured his mother's attic in Torrance. They found nothing.

Viens' tone was mostly even during the interview in March 2011, though he stopped to ask for pain medication and water. In the courtroom, he listened to the recording in a wheelchair, the result of his plunge off the cliff, either staring ahead or scribbling notes. Some jurors looked stunned by the tape-recorded disclosures.

In both interviews with investigators, Viens' story of his wife's final hours tracks closely with what he told his daughter and the woman he dated after his wife vanished. Both of them testified for the prosecution last week.

Photo: Homicide investigators search for human remains beneath the concrete floors of the Thyme Contemporary Cafe in Lomita in March 2011. Chef David Viens says he disposed of his wife's body by cooking it. Credit: Mark Boster / Los Angeles Times