Border Patrol officer kills woman who dragged him with her car 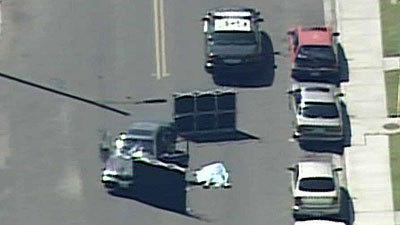 A U.S. Border Patrol agent fatally shot a woman through the windshield of her car Friday afternoon after he was dragged several hundred feet down a residential street in the San Diego suburb of Chula Vista, federal authorities said.

“Fearing for his life, he discharged his weapon, striking the driver who died at the scene,” U.S. Customs and Border Protection said in a statement.

The plainclothes agent was in the area serving a warrant, authorities said. No more details were provided. The neighborhood is about five miles from the Tijuana-San Diego border. The FBI and Chula Vista Police Department are investigating the incident.

While most agent-involved shootings in recent years have taken place along the border, agents also operate in neighborhoods near the border searching for suspected smugglers or illegal immigrants with criminal records.

'Sons of Anarchy' creator not surprised by Johnny Lewis' death

Photo: The woman's body can be seen near her car. Credit: Fox 5 San Diego