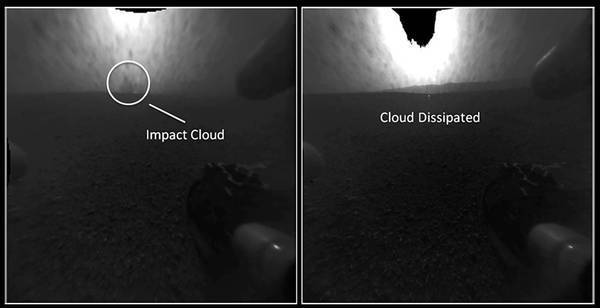 The mystery of the blotch on one of the Mars rover Curiosity's photos appears to have been solved.

Engineers said Friday that the Curiosity rover happened to catch a picture of its own ride crash-landing on Mars — a blink-of-an-eye serendipity that some dismissed as a statistical impossibility, but appears to have been confirmed by a thorough review of landing data.

The final seconds of Curiosity’s eight-month-plus journey to Mars called for a spacecraft to lower the rover to the surface using a “sky crane” — three ropes. The ropes were then cut, and the last of the spacecraft, known as the “descent stage,” cast itself toward the horizon. It crash-landed, on purpose, about 2,000 feet away.

The photograph captured a pyramid-shaped blotch on the horizon. The same photo taken 45 minutes later with the same cameras showed the same view of the Martian landscape, but no blotch.

PHOTOS: Inside the Mars landing at JPL

Die-hard space fans took to the Internet raising the possibility that the blotch was an image of the spacecraft crashing into the surface, an extraordinary coincidence considering the potential variables and the fact that the shutter was open for only 200 milliseconds.

“We expected it to kick up quite a lot of dust,” said Steve Sell, a member of Curiosity’s entry, descent and landing team. Still, the chances of the image being captured were “insane,” one engineer said.

On Friday, JPL reported that an examination of the mass of data Curiosity had sent home about its elaborate landing sequence showed that the photo did capture the craft crashing into the surface.
The spacecraft that had deposited Curiosity on the surface took about 20 seconds to arc across the Martian sky and crash at about 100 mph.

The photo was taken about 40 seconds after landing, but it appears that the tremendous impact sent up a cascade of Martian soil that was still hanging in the air when Curiosity snapped the photo. That could be due in part to the fact that Mars’ gravity is just 38% as strong as gravity on Earth.

Many had dismissed the plume as dirt on the camera lens, but engineers pointed out that the initial photo was taken in stereo, with two side-by-side lenses. Both images picked up the same blotch. That eliminated the possibility that the lens was simply dirty, and confirmed, Sell said, that “the artifact was real.”

“We believe we’ve caught what is the descent stage impacting on the Martian surface,” Sell said. “We’re fairly certain that is the impact plume."

Photo: Images taken by the Curiosity rover on Mars show a plume of dust, left, which had disappeared when another photo was snapped 45 minutes later. Engineers say the plume indicates the crash-landing of the spacecraft that delivered the rover to the Martian surface. Credit: NASA