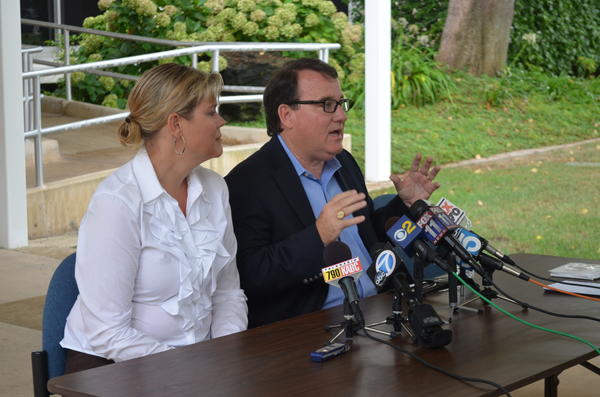 Costa Mesa Mayor Pro Tem Jim Righeimer on Friday accused local employee associations of being behind a 911 call that led to an officer giving him a field sobriety test outside of his home.

"This has gone way over the line," Righeimer said at a press conference outside of City Hall. "I understand that pensions are a tense issue, that pay is a tense issue. I understand that some people may disagree, but when what looks like someone is paid to follow me around town and set me up for a DUI in front of my kids and my house, it's crossing the line."

Righeimer, who has proposed outsourcing public employee jobs to the private sector, did not offer evidence as to why he thought union members or sympathizers were behind the call, nor did he specify which unions — employees are represented by various organizations — he thought was involved.

Jennifer Muir, spokeswoman for the Orange County Employees Assn., said Righeimer was unjustified in pointing the finger at unions.

"It's absolutely not credible," Muir said. "He has no reason to say this except to make a political point.

"We're absolutely not involved, and I think that Mr. Righeimer is making baseless accusations and holding a press conference," she continued. "It's embarrassing to the city."

Righeimer, however, tied the incident to comments he made the night before at a City Council meeting, when he criticized Orange County police unions for using a law firm that outlined on its website some election-year tactics that can be used against politicians.

Costa Mesa Police Officers' Assn. President Jason Chamness said in an email that his association cut ties with the law firm because it was working toward a less aggressive approach to negotiations with the city.

According to police, an informant called 911 about 6 p.m. Wednesday and followed a possibly drunk driver, later identified as Righeimer, from Skosh Monahan's at 2000 Newport Blvd. to Righeimer's home in Mesa Verde. The caller also pointed out the Righeimer's house to a responding officer.

The officer went to Righeimer's door and asked him to step outside, where he gave him a brief field sobriety test.

Righeimer had not been drinking and was not drunk, police confirmed in a statement issued Thursday.