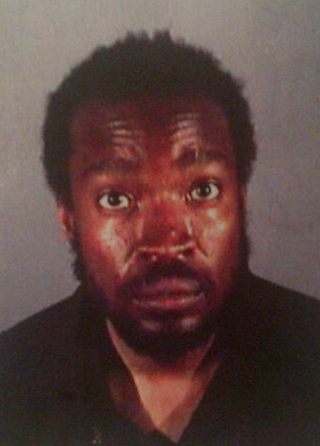 A homeless man who authorities suspect stabbed three Los Angeles-area transients while they slept and left behind rambling “death warrants” is believed to also be responsible for two other knife attacks in Santa Barbara, police said Saturday.

Courtney Anthony Robinson, 38, called 911 at around 8:40 p.m. Friday  and surrendered to police shortly after at a Hong Kong Express eatery in the center of Hollywood, LAPD Cmdr. Andrew Smith told reporters at a briefing.

Smith said Robinson was “lucid” and was taken into custody without incident.

Details of the stabbings that occurred in Santa Barbara were not immediately available, but Smith said no "death warrant" was left at the scene of these crimes.

In the LAPD’s jurisdiction, Robinson is suspected in the July 3 attack on a 56-year-old man at 3rd and Main streets in downtown Los Angeles and the stabbing of a 54-year-old homeless woman as she slept near La Brea and De Longpre avenues blocks from Hollywood High School. Police also believe Robinson stabbed a man as he slept Tuesday on bus bench along the 3rd Street Promenade in Santa Monica.

In all three attacks the knife was left in the victims’ body, but none of the stabbings was fatal, police said.

Smith said Robinson, who signed his “death warrants” David Ben Keyes, targeted the victims “for specific reason." But detectives "don't want me to discuss what that particular reason was," Smith said. "That'll be presented to the district attorney and that'll come out in court proceedings."

Police do not believe Robinson was related to any of the victims.

Smith would not discuss a possible motive for the stabbbings, but said “no robbery was evident.”

Robinson was booked for attempted murder at the Metropolitan Detention Center and is being held on $500,000 bail, plus $31,705 in outstanding misdemeanor warrants, Smith said.

Man is held in stabbings of three homeless people