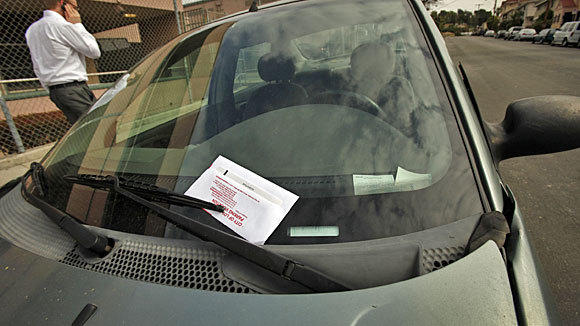 Larry Gross, executive director of the Coalition for Economic Survival, which advocates on behalf of low-income renters, said working-class families would struggle to pay their parking fines, which are higher than in any neighboring city.

"This is all about generating more money for the city, rather than justly penalizing a person for the infraction they're committing," he said.

The City Council voted unanimously for the fine increases, which will apply to the 2.5 million city parking tickets issued annually and are expected to generate an extra $8.4 million in the next year for the city's general fund budget, which pays for basic services such as police and firefighters.

In a second vote, the council raised zoo admission fees by $1 — the fifth increase in five years. The move is expected to raise an additional $720,000 per year for city coffers.

Mayor Antonio Villaraigosa backed both sets of increases as part of an effort to eliminate a $238-million budget shortfall. Since he took office in 2005, the cost of zoo admission for children 12 and younger has more than doubled, from $5 to $12. The price for senior citizens went from $7 to $14 over the same period.

Under the parking proposal, the fine for an expired meter will increase to $63; tickets for parking on street sweeping day will cost $73; and parking in a red zone will carry a $93 penalty. A few violations — those dealing with handicapped parking — will go up by $10.

The council made both decisions before going on a two-week break.

Photo: Parking mistakes will be taking a bigger bite out of drivers' budgets to help the city's. (Al Seib/Los Angeles Times)