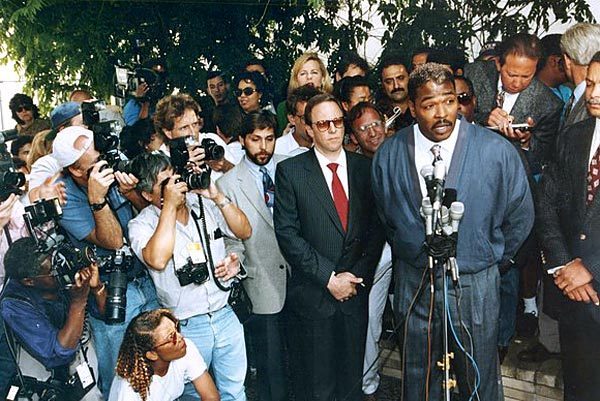 Rodney King, who became an international figure overnight after his beating by police spark the 1992 Los Angeles riots, was a "symbol of civil rights," the Rev. Al Sharpton said Sunday after news broke of King's death.

King’s fiancée found him at the bottom of his pool at his home in Rialto early Sunday, police said. Officers pulled him from the pool and began CPR until paramedics arrived and took King to Arrowhead Regional Medical Center in Colton.

King was pronounced dead at the hospital at 6:11 a.m., police said.

Preliminary information indicated King drowned and there were no immediate signs of foul play, police said, but an autopsy will be conducted.

Sharpton said in a statement that King's beating "made America focus on the presence of profiling and police misconduct."

"Rodney King was a symbol of civil rights and he represented the anti-police brutality and anti-racial profiling movement of our time," Sharpton said. "Through all that he had gone through with his beating and his personal demons he was never one to not call for reconciliation and for people to overcome and forgive."

Sharpton continued: "History will record that it was Rodney King's beating and his actions that made America deal with the excessive misconduct of law enforcement."

After his beating, King became a symbol for police brutality and the troubled relations between the LAPD and minority residents. He was eventually awarded a $3.8-million settlement, but the money and fame brought him little solace. He had repeated run-ins with the law and as of April said he was broke.

"I sometimes feel like I'm caught in a vise. Some people feel like I'm some kind of hero," he told The Times earlier this year. "Others hate me. They say I deserved it. Other people, I can hear them mocking me for when I called for an end to the destruction, like I'm a fool for believing in peace."

During a public appearance earlier this year for a memoir, titled "The Riot Within: My Journey From Rebellion to Redemption," King seemed in good spirits and said he was trying to turn a corner in his life.

GRAPHIC: Where are the L.A. riots’ key figures now?

Mark Tauber of HarperOne, which published the book, also released a statement Sunday about King's death.

"We are incredibly sad to hear about the passing of our author Rodney King," Tauber said. "Our love, prayers and support are with Rodney's family and Cynthia."

King found at bottom of pool by fiancee

King's death investigated as a drowning

King struggled with demons after beating

Photo: Rodney King, speaking to the media on May 1, 1992, asks for an end to the killing, looting and destruction that his case caused. Credit: Larry Davis / Los Angeles Times