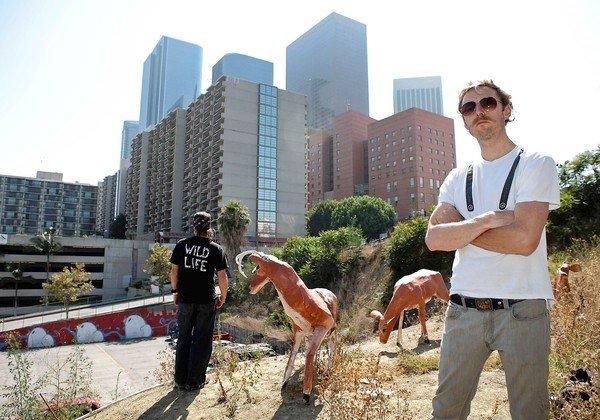 Downtown L.A. has no shortage of street art, from the historic murals that grace freeway walls and aging brick buildings to the flowering graffiti and the more graphical works from the likes of Shepard Fairey. Some of it is political. Some of it is social commentary. Much of it is serious.

But over the last several weeks, downtown has been the site of a decidedly lighter form of guerrilla street art that has generated much buzz and debate over its deeper meaning.

It started in May when Calder Greenwood and his partner, known only as Wild Life, placed a family of life-size sunbathers in an empty downtown lot, the site of a stalled federal courthouse. Later, papier-mache deer popped up in the untrimmed weeds by 4th and Hill streets. Then a wooden tree sprouted from a stump near Spring and 2nd streets. Then a surfer was placed in the L.A. River.

The pieces created a sensation as bloggers and passersby pondered the back story: Was this some statement on blight or urban renewal? Or was it a work of subtle advertising?

Neither, said Greenwood, a transplanted New Yorker who moved to downtown L.A. last fall. His only goal was to get people to notice things they pass every day but never see.

"I'm inspired by downtown," Greenwood said. "What some see as an eyesore, I think is beautiful. It's just getting people to look up and see what's otherwise invisible."

Street art veterans said the simplicity and fanciful nature of the pair's work set it apart.

"I find that purity refreshing," said Daniel Lahoda, founder of LA Freewalls, an unofficial art initiative that invites international muralists to paint, technically illegally, on the walls of downtown buildings.

"The sunbathers weren't done along with a brand, or a marketing stunt for the artist's career. It was done just for art's sake.... I think there's a lot of power behind this type of uncommissioned art."

Lahoda said other artists have also found ways to enliven downtown, including one graphic designer who creates 3-D quartz formations with shiny paper, filling in defunct telephone booths and holes in brick walls.


Greenwood, 32, who creates short films and visual effects, said he was taking his parents to the Walt Disney Concert Hall when they walked by a dirt pit, half-filled with rainwater, and "this image of sunbathers just popped in my head."

By chance, he met Wild Life, a longtime L.A. artist who once created street signs that said "DRUGS" and "HEROIN" and placed them around skid row. Within minutes of their first conversation, the two had committed to the same artistic vision.

During their downtime, in a packed windowless workroom in the back of Greenwood's apartment, the two spend a few days each week creating realistic sculptures out of recycled cardboard and papier-mache.

Their installations have been subtle enough to stand unnoticed by many, but bring a brief moment of amusement to those who pause long enough to see them. In the parking lot by an unattended grassy slope, one valet said the deer's arrival made him want to clean up the weeds and trash that he had barely noticed before.

"I both live and work in downtown, and it still doesn't have a lot of green space and you can't really get away from the concrete landscape," said Estela Lopez, executive director of the Central City East Assn. "So to be able to walk around that area and have something to laugh at is fabulous."

Photo: Artist Calder Greenwood, right, and his partner, known only as Wild Life, stand next to their most recent installation: three deer perched above a parking lot on Hill Street in downtown Los Angeles. Credit: Katie Falkenberg / For The Times