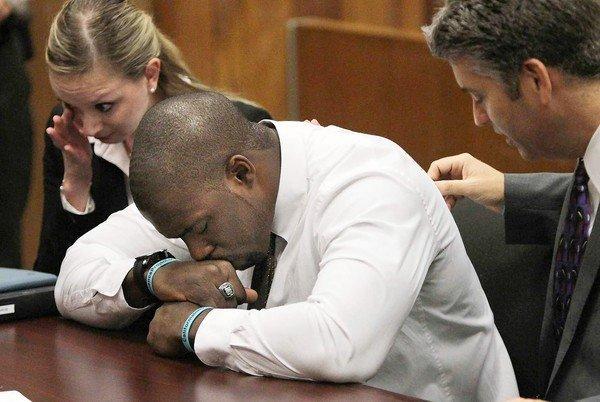 A day after a former high school football star had his rape conviction dismissed, attention has focused on the woman who recanted the sexual assault claim she made 10 years ago.

Wanetta Gibson was a high school sophomore when she accused Brian Banks of raping her at Long Beach Poly High School. She and her family sued the school, receiving a $750,000 settlement, and Banks spent five years in prison after pleading no contest to forcible rape.

Even though a judge Thursday tossed out the rape charge, it remains far from certain if Gibson, 24, will face any consequences.

Banks, now 26, said he wants to put the ordeal behind him and has not considered any legal action against Gibson. L.A. prosecutors have also said they have no plans to charge her for making false accusations, saying it would be a tough case to prove.

Legal experts noted it could be difficult for the Long Beach school district and its insurer to get the settlement back.

Then there is the reality of Gibson’s life.

Court records suggest she has few assets: She received public assistance for a time and her children, ages 4 and 5, still do, according to two suits brought by the county in an attempt to collect child support. Gibson, who could not be reached for comment, was ordered initially to pay a $600 a month toward their support. But in the last year, county officials said she didn’t have to pay anything, citing a lack of income and employment.

According to Banks and his private investigator, Gibson refused to tell prosecutors she had lied, so that she wouldn't have to return the money she and her family had won in court.

She also said she feared it would affect her relationship with her children, Banks' attorney alleged in court papers.

The statute of limitations for making a false claim is four years, but experts say it could restart when a previously hidden crime is discovered. In this case, Gibson testified in 2003 during Banks’ preliminary hearing but recanted her accusation last year. “No, he did not rape me,” she told Banks and his private investigator in a recorded conversation.

“The prosecution can say that we only learned last year that the crime of perjury occurred and therefore we are still within the statute of limitations,” Loyola Law professor Stan Goldman said.

The fact that Gibson was a juvenile when she initially made her accusation poses a potential complication, as does the fact that she has since recanted her recantation, but Goldman said the large monetary settlement she received might make charging her a priority to prosecutors trying to ensure the integrity of the criminal justice system.

Police in Long Beach said there is no official investigation into Gibson’s conduct, but officers are “reviewing the matter” and “will be in consultation with the district attorney’s office following the review,” spokeswoman Lisa Massacani said.

Photo: Brian Banks, with his attorneys, is overcome with emotion in the courtroom. When he heard from the alleged victim last year, “I stopped what I was doing and got down on my knees and prayed to God to help me play my cards right.” (Bob Chamberlin / Los Angeles Times / May 24, 2012)