Police put on riot gear as May Day protests converge

Police in riot gear lined some streets of downtown Los Angeles on Tuesday evening as more than 1,000 immigrants rights protesters and Occupy activists converged in one big march.

The march on Broadway Avenue was organized by the Southern California Immigration Coalition and was permitted by police. It was made up mostly of students, who waved flags from Latin American countries and sang along to Spanish hip-hop songs pumped from speakers on the back of a flat-bed truck.

About 5 p.m., a group of Occupy activists joined their ranks after a day of their own marches in Los Angeles County. One immigration activist welcomed them with shouts of, "Woohoo, Occupy!"

The largely peaceful protest took a tense turn when a female officer was struck in the head with a skateboard near 4th and Hill streets and taken to a hospital, according to a police official. The impact of the blow dented her helmet, the official said, but her injury appeared not to be life-threatening. 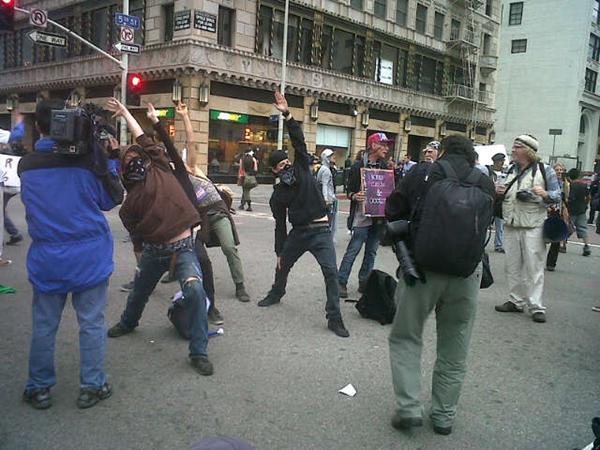 Overall, however, officials said most of the thousands of protesters who took to the streets Tuesday were nonviolent.

Occupy protesters said they planned to converge at Pershing Square for a general assembly meeting at 7:30 p.m. Protester Ruth Fowler said the group did not plan to march to City Hall, where, earlier in the evening, dozens of officers were standing guard.

May Day protests marred by vandalism in San Francisco

May Day observer at Olvera Street: 'I'm a little underwhelmed'