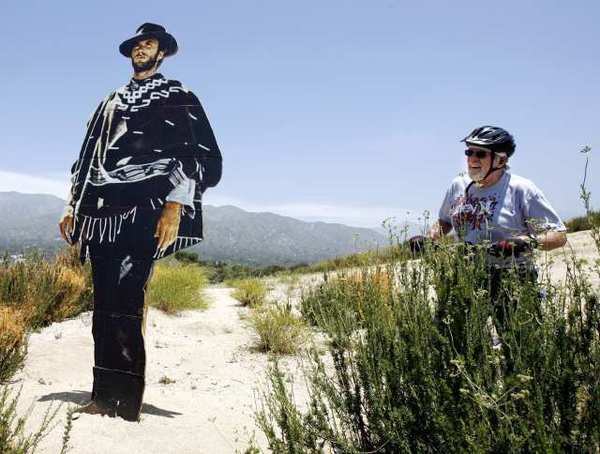 A gunman with a reputation for cleaning up corrupt backwater towns has taken up residence in La Cañada Flintridge, with an eye on north Glendale and the whole Crescenta Valley.

A cutout of Clint Eastwood, in a pose from his 1964 Spaghetti Western “A Fistful of Dollars,” stands atop a hill near the Glendale Freeway west of Verdugo Hills Hospital. Eastwood is steps off a trail that begins near Descanso Gardens and connects with other trails and fire roads in the San Rafael Hills. Drivers on the Glendale Freeway can easily make out his silhouette.

Reg Green, 83, of La Cañada Flintridge, ran into the Eastwood figure during a weekend hike earlier this month. “I was up there minding my own business and suddenly out of the mist I saw this figure. He was tall and obviously a man, and I did a double-take,” Green said. “For a split-second, it did look as though there was a genuine, old-fashioned cowboy out there.”

The Eastwood figure bears a marker saying it is a “Glendale Public Art Project 2012.” Glendale spokesman Tom Lorenz said it doesn’t appear to be affiliated with any city arts program.

Photo: Ernie Hess of Montrose looks at a cutout of Clint Eastwood placed on a ridge at the top of the Verdugo Hills overlooking the Glendale Freeway. A note taped to the back of the cutout says "The World Sees Art and the Art Watches Back" Glendale Public Art Project. (Raul Roa / Staff Photographer / May 23, 2012)