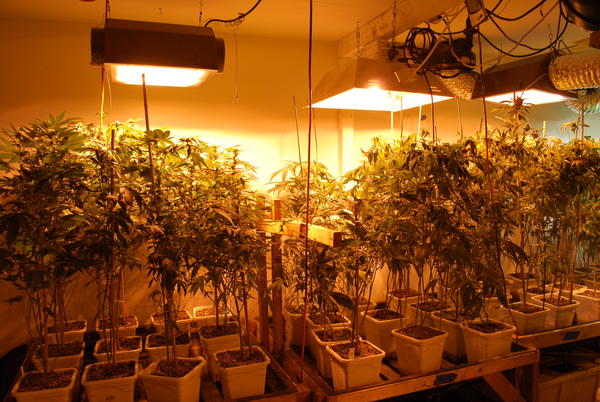 Three men with ties to a Montrose irrigation business were arrested Wednesday night after police seized 700 marijuana plants from a warehouse in Van Nuys and 200 more at the home of one of the men.

The men — Steve Nemenyi, 47, Glenn Poppler, 42, and Mark Mayer, 46 — were arrested by Glendale police on suspicion of possessing marijuana for sale after the seizure, which also yielded more than 50 pounds of pot. They were released about 3:50 a.m. Thursday after posting $100,000 bail, police said.

“It was a very sophisticated grow,” police narcotics Sgt. Luis Pasache said. “Everything was pretty much operated on its own.”

The operation may have been going on for two years, Pasache theorized, with harvests once or twice a month.

“The sales of drugs will not be tolerated and will be investigated to its fullest extent,” Bickle said in a statement, adding that his goal was to make it “very difficult” for drug dealers to operate within the city.

Photo: Glendale police seized 700 marijuana plants, some of which are shown above, during the raid. Credit: Glendale Police Department